Cyprus Shipping News
Home Technical Ship emissions can be cut by 97.5%, by switching to foiling electric... 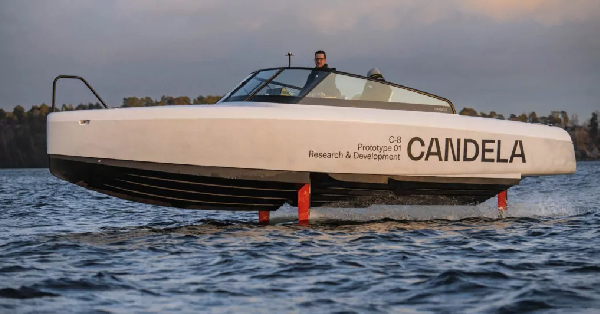 A study from The Royal Institute of Technology in Stockholm says emissions from ships could be reduced by 97.5% by switching from diesel vessels to a new type of electric hydrofoil ship that will be introduced in Stockholm next year.

Next year, the Region of Stockholm will sea trial the fastest and longest-range electric ferry to date; Candela P-12 Shuttle, the world’s first hydrofoil passenger ship.

In addition to being fast and comfortable, a new study from Stockholm’s KTH Royal Institute of Technology suggests that ships with electric hydrofoil technology could reduce emissions from marine transport by 97.5% compared to current diesel vessels.

The country’s leading technical university, KTH, has compared the Candela P-12 Shuttle with the city’s diesel-powered vessels in a life cycle analysis. The analysis examines the different stages of the product’s life; extraction of raw materials, manufacturing and use phase until the product is no longer used, and must be disposed of or recycled. The study shows that over a lifetime of 30 years, the carbon footprint of a Candela P-12 Shuttle is 97.5% lower than that of the compared diesel ships.

According to the authors, the study is the first to demonstrate the difference in environmental impact between electric hydrofoil ferries and traditional ferries. It shows that electric flying ferries can play a significant role in the transition to more sustainable maritime transport.

– The combination of using hydrofoils and being powered by electricity is the main factor in lowering emissions. And since the Swedish electricity grid is almost free of carbon dioxide emissions, this type of ship has a clear advantage, says Felix Glaunsinger, one of the authors of the study.

The hydrofoil technology means that the boat is lifted on wings that ’fly’ under water, eliminating water resistance from pushing the hull through water. The hydrofoils reduce energy consumption by 80% compared to conventional ships. When the 30-knot Candela P-12 enters sea trials in 2023, it will be the fastest electric ship in the world and also the fastest passenger vessel in the Stockolm public transport fleet. With a range of 60 nautical miles, it can cover the archipelago’s longest routes. Since the flying ferry doesn’t create any wake, the city has granted it an exemption from the speed limits, cutting travel times from 55 minutes to 25 minutes on the maiden route from the suburb of Ekerö to central Stockholm.

The KTH study also shows that the Candela P-12 Shuttle has a low carbon footprint from production compared to the diesel ferries examined – an interesting finding, since other electric vehicles, such as cars, often have a heavier carbon footprint from production than fossil fuel-driven equivalents due to the negative impact of manufacturing the batteries.

– Just like aircraft, our vessels are made to be as light as possible to maximize the number of passengers and performance. A welcome side effect is that we’re able to use smaller batteries and less raw material, which in turn means a lower negative climate impact, says Erik Eklund, head of Candela’s commercial vessels.

Worldwide, ships account for around 3% of global greenhouse gasses, comparable to the global aviation industry’s emissions. Emissions are expected to rise considerably in the coming years despite the International Maritime Organisation’s ambition to cut ships’ carbon intensity by 40% by 2030.