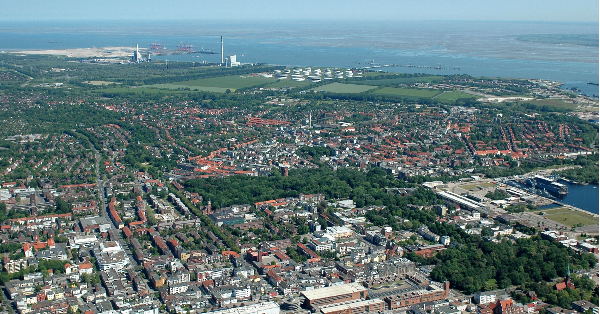 The first German floating terminal for importing liquefied natural gas (LNG) has officially been commissioned for service in Wilhelmshaven. Even before Christmas, LNG will be re-gasified and conveyed via the newly created Wilhelmshavener Anbindungsleitung (Wilhelmshaven Connector Pipeline/WAL) into the German long-distance gas grid. To make this happen, the Floating Storage and Regasification Unit (FSRU), in the form of Norwegian company Höegh LNG’s vessel “Höegh Esperanza”, arrived two days earlier at the Umschlaganlage Vosslapper Groden (Cargo Handling Facility Vosslapper Groden/UVG). An annual volume of at least five billion cubic meters of natural gas is expected to be imported and fed into the German long-distance gas grid via the LNG Terminal in Wilhelmshaven. This represents some six percent of the German gas consumption. That means that this volume will replace some eleven percent of Germany’s gas imports from Russia.

Broad Political Interest
German Chancellor Olaf Scholz, Niedersachsen’s Prime Minister Stephan Weil, German Minister for Economic Affairs Robert Habeck, and the Federal Minister of Finance Christian Lindner are on site, attending the official opening. Niedersachsen’s Minister for Economic Affairs, Olaf Lies, Minister for Environment and Energy, Christian Meyer, and additional representatives of the state, the city, and regional communities are also in attendance. During the past ten months, the three companies Niedersachsen Ports, OGE, and Uniper worked hand in hand, and in record time they created the infrastructure on the North Sea shore in the shape of the Import Terminal and the Wilhelmshaven Connector Pipeline (WAL) and are now welcoming the companies’ project teams aboard the LNG ferry MS “Helgoland”.

Hand in Hand Towards a Common Goal
The short stretch of time since March of 2022 entailed some important steps: The preparation of numerous approval documents in the spring, start of construction with the first pile-driver blow on May 5, chartering the FSRU in July, start of construction work and laying pipes for the connection pipeline in August, handover of the completed port jetty in November, the connection of the WAL to the long-distance gas grid, and the on-time arrival of MV “Höegh Esperanza” are only a few examples.

Background:
Barely ten months ago, the German government had set the new course for the energy supply in order to strengthen the energy security as early as this winter and to diversify their gas sourcing. The implementation was only made possible through tight collaboration between politics, authorities, and companies.

The first import terminal for LNG in Germany was realized in Wilhelmshaven at the Cargo Handling Facility Vosslapper Groden (UVG). At the request of the Federal Republic of Germany, Uniper will be operating the terminal. The FSRU was chartered and made available by the Federal Republic of Germany. Within the context of supply security, Germany is benefiting from the diversification of the sources and from the avoidance of one-sided dependencies: LNG can be sourced from new suppliers and thereby contribute to the supply security. It is Uniper’s goal to strengthen Germany’s supply security and to pave the way towards a sustainable energy future. The design of the LNG Terminal and pipelines was planned in a ‘hydrogen-ready’ way, thus enabling synergies for the move towards a CO2-neutral energy economy.

The location Wilhelmshaven offers ideal conditions, both, from a maritime and from a logistic point of view. LNG tankships of all sizes will be able to call the facility, regardless of the tides and in compliance with the highest international safety standards. For the connection to the existing LNG long-distance grid, a gas pipeline with a total length of 26 kilometers was constructed, the implementation of which was accomplished by the company OGE.

At the floating LNG Terminal, the LNG that is delivered by a tankship is conveyed onto the FSRU. There, it is vaporized, thus converting it back to a gaseous state. Subsequently, the gas is fed via the Wilhelmshaven Connector Pipeline (WAL) into the German long-distance gas grid at Etzel.

Germany’s first LNG jetty project was performed under an immense time crunch and is of stellar importance for ensuring that Germany’s gas supply is secure. Niedersachsen Ports performed the requisite works on the port infrastructure; construction of the terminal itself was carried out by Uniper. Prior to that, Niedersachsen Ports, in a joint effort with Uniper, had examined the feasibility of such venture.

Involved in the fast implementation were some 1,000 people, all told, and more than 3,500 pages of application documents were generated and processed.

Some 14,000 metric tons of steel and 1,500 tons of custom-fabricated steel pipe were installed and 3,000 cubic meters of concrete were poured. For the foundation of the jetty, a total of 194 pylons were impact-driven into the ground to give the structure the necessary stability. A total of nine semi-finished concrete components were prefabricated and towed by sea on a pontoon to the construction site.

OGE is one of Europe’s leading long-distance pipeline operators. With a pipeline network of some 12,000 kilometers, we are transporting gas throughout Germany, and due to our geographic location, we are the connection interface for the gas streams within the European Single Market. Some 1,450 of our employees ensure supply security. We make our network available to all market participants in a non-discriminatory, transparent manner that is in line with the market.  We are designers of energy supply. Today and for the energy mix of the future. You can find additional information about our company under www.oge.net.

Uniper is an international energy corporation with place of business in Düsseldorf and business activities in more than 40 countries. With some 7,000 employees, the company makes a significant contribution to Europe’s overall supply security. Uniper’s core activities include electric power generation in Europe, global energy trade, and a broad gas portfolio. Uniper sources gas, including liquefied natural gas (LNG), and other energy sources on the global markets. The company owns and operates gas storage facilities with a total capacity in excess of 7 billion cubic meters. Uniper intends to operate their installed power-generating capacity in Europe of some 22.5 GW in a CO2-neutral manner by 2035. Even today, the company is one of the largest operators of hydroelectric power plants in Europe and plans to further expand into solar and wind energy as a key to a more sustainable and independent future.
Uniper is a reliable partner for communities, municipal utilities, and industrial companies during the planning and implementation of innovative, CO2-reducing solutions on the path towards decarbonization of their activities. As a hydrogen pioneer, Uniper has their activities spread out along the entire value chain, and is implementing projects that utilize hydrogen as a supporting pillar for the energy supply.

Collection of Quotations for the Commissioning of the LNG Terminal Wilhelmshaven

“Today, after a project duration of merely ten months, we are proud to commission Germany’s first LNG Terminal in Wilhelmshaven. This goes to show what Germany is capable of and it could be the blueprint for other projects of the energy transition. I would like to thank all the people that helped implement this project before the first critical winter: the project team at Uniper, the project partner companies, and last, but not least, the participants in the public sector.  For the short term, we are now able to cover about 6 percent of our gas needs with LNG that is shipped directly to Germany. But one thing is clear: The investments in this project are also investments in a future without CO2: In the mid- to long term, Uniper’s project ‘Green Wilhelmshaven’ is slated to make a great contribution to the decarbonization of the German industry through the import of green ammonia and through the production of green hydrogen.”

“Wilhelmshaven is once again the showcase of an ideal site where we can build alternatives for Germany’s energy supply in the short run. This also means that this port on the Jade Bight is getting one step closer to its goal of becoming a hub for sustainable energy production.”

“Thanks to their anticipatory and sustainable development strategy, the Seaports of Niedersachsen are now in a position to act on a whim. We have been able to clearly and confidently express the potential for the sites along the North Sea shore for quite some time now: The ports can provide energy, and therefore make their contribution to Germany’s energy transition.”

“Today is an important day for the energy supply in Germany. Together with our project partners, we were able to accomplish in ten months what normally would have taken years. With the Wilhelmshaven Connector Pipeline (WAL), OGE was able to make an important contribution to the effort of becoming independent from the Russian energy deliveries and to transport green gases in the future. We are proud of this achievement and would like to thank: The German Federal Government, the State of Niedersachsen (Lower Saxony), the cities and communities, but also the citizens of the region, our project partners, and, of course, all OGE employees that were involved.”

“Höegh LNG is honoured to be working with the German government, Uniper and other project stakeholders to implement fast track energy solutions for Germany. We are committed to ensuring that our floating storage and regas terminal (FSRU) Höegh Esperanza will deliver reliable, safe and cost-efficient natural gas supplies for Germany and Europe.”