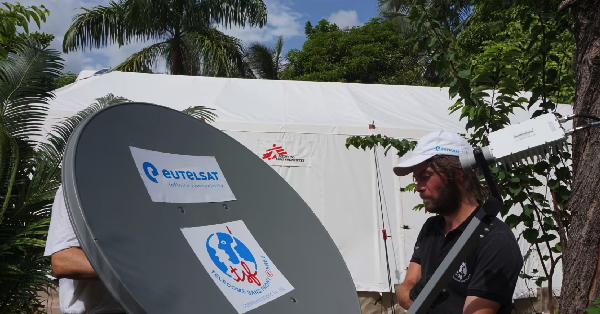 Eutelsat Communications, one of the largest global satellite operators, and Télécoms Sans Frontières (TSF), the world’s first NGO focusing on emergency aid telecommunications, today announced the inking of a multi-year sponsorship deal that follows on from a previous long-term partnership agreement between the two companies initiated in 2007. Eutelsat’s Chief Executive Officer Eva Berneke and Jean-François Cazenave, TSF’s Chairman, met at Eutelsat’s headquarters to set out further initiatives to be conducted as part of this close collaborative relationship.

TSF with missions in more than 70 countries

Télécoms Sans Frontières is a non-governmental organisation headquartered in Pau, France, with two regional sites in Asia and South America. Its role is to bring back connectivity and raise awareness and protect communities in various emergency situations by providing them with advanced technological solutions for communication and access to information.

With their unique deployment capacity, TSF’s teams can be operational in any part of the world within 24 hours of being notified of a humanitarian crisis situation. TSF’s assistance is built on a combination of direct assistance to the affected communities and support for connectivity to humanitarian coordination centres, using best-in-class technologies, in particular satellite infrastructure.

Fifteen years working together in the field

With logistic support from Eutelsat since 2007, this NGO of truly global scope has been able to equip communities and crisis units with broadband links for data, image and voice communications within a few hours. For several years now, Eutelsat has successfully partnered with TSF in large-scale conflict areas and natural disaster zones to coordinate the various relief efforts in the field. Now a sponsor of TSF, Eutelsat is stepping up its financial support, helping the NGO to strengthen its capacity in order to rise to the communications challenges associated with emergency aid.

Eva Berneke, Eutelsat’s Chief Executive Officer, commented: “In emergency and disaster situations, satellite connectivity often remains the only viable solution for restoring critical communications services for communities and local and global humanitarian responders as quickly as possible. Our partnership with TSF is an integral part of our corporate responsibility in the area of emergency telecoms. We are delighted to further contribute to the activities of this outstanding NGO.”

Jean-François Cazenave, Chairman of Télécoms sans frontières, added: “For 15 years, Eutelsat’s unfailing support has enabled TSF to set up critical satellite-based connections during major humanitarian emergencies around the world, from natural disasters to major conflicts and mass population displacements. The strong cooperation between TSF’s teams in the field and Eutelsat’s departments has enhanced TSF’s response capacity. This combination of capabilities enables us to serve the connectivity requirements of governmental authorities, United Nations agencies and humanitarian organisations with technologies that are most effective and best suited to their needs. When disaster strikes, it is in the early days that the largest number of lives can be saved. Through our joint efforts, we are delivering Communications for life.”