Cyprus Shipping News
Home World The approval of the northern container terminal makes an impact on the... 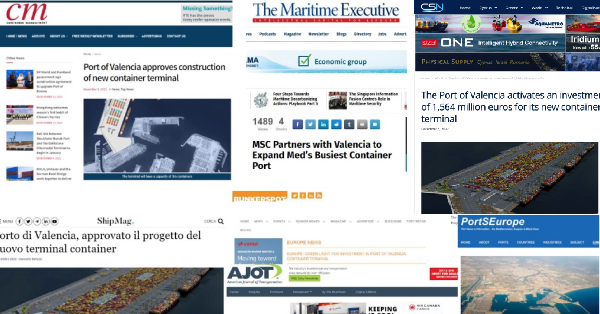 The Italian media have highlighted the public-private partnership and the presence of the Italian-Swiss shipping company, MSC through Terminal Investment Limited

The North American press specialised in logistics and transport underlines the size of the investment: one of the most important currently under way in the ports of the world

The main international media of the port sector have this week echoed the approval by the Board of Directors of the Port Authority of Valencia  of the construction project of the Container Quay of the North Extension of the Port of Valencia. An initiative that will strengthen the position of the Valencian precinct as one of the strategic port hubs of world reference and one of the main ones in Europe.

Specifically, the European, American and Asian sectoral media such as Container Management, Ports Europe, Seatrade Maritime, Bunker Ports News, Shipping Technology, Cyprus Shipping News, American Journal of Transportation or Maritime Executive have focused this week on the announcement of the approval of the construction project for the new container terminal which will be located in the inland waters of the northern extension of the Port of Valencia.

All of them have highlighted the magnitude of this project – one of the most important currently being carried out in the port world – both in terms of the figures involved in the investment, which the American media have put at more than “1.6 billion” dollars (1,600 million), and the capacity in terms of traffic data, services of the new infrastructure or the environmental measures that the start-up of this terminal will mean for Valenciaport. This information has also been reflected in portals dedicated to new energies such as Offshore Energy, which highlights that this new terminal will have low emissions, or in the media on major works such as World Construction Network.

The Italian media, such as ShipMag, Ports News Tirreno, Ship2Shore or Agenzia Nova have highlighted the public-private partnership and the presence of the Italian-Swiss shipping company MSC through Terminal Investment Limited (TIL) as the company that will operate the new terminal for which it will allocate more than 1,000 million euros.

The northern container terminal will be a clear example of an infrastructure that combines sustainability and growth. On the one hand, it will be the most environmentally advanced in the world and, on the other, it will contribute to generating employment and wealth in the Valencian Community and Spain. The works that will make this project a reality will be always subject to rigorous environmental control and monitoring, like all the projects carried out by the Port of Valencia, with the firm objective of achieving the 2030 goal of zero emissions.

In environmental terms, the new container terminal will be a smoke-free space, as it will minimise CO2 emissions by supplying electricity to cranes and yard machinery, and to container ships that will connect their engines to the electricity grid during their stay in Valencia. The project presented by TIL/MSC to Valenciaport includes the electrification of 98% of the driving components and installations of the terminal; and in addition, 100% of the electricity will come from renewable sources, which in turn will imply a 98% reduction in CO2 emissions.