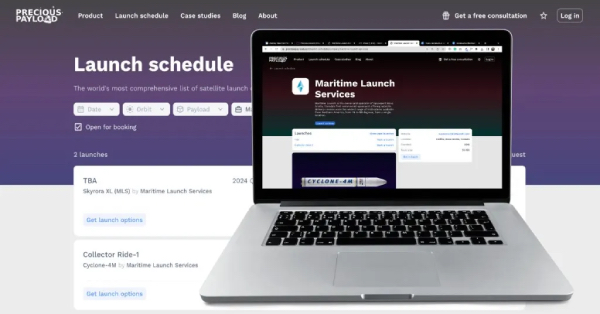 Commercial spaceports are actively entering the space launch market as individual contributors, with examples emerging in Australia, the U.K., Norway, and Brazil. This trend is being driven by the need for greater frequency and reliability of launches, as well as by the development of new spaceports offering lower costs and flexibility.

“There is exponential growth in the commercial space transportation industry. Commercial spaceports are in full swing, exploring how to become a multi-tenant facility which provides services for licensing, operations, range – sometimes also pre-launch, testing, and integration – and of course, launch operations. We’ve chosen Maritime Launch as a pioneer of this model, and we’re eager to help prove their business case and set a precedent for the rest of the industry.”

Earlier this year, Maritime Launch announced a partnership with Canadian rocket manufacturer Reaction Dynamics to perform its inaugural suborbital flight in 2023 and to also launch their first orbital launch vehicle, the Aurora, in 2024 as a white-label offering from Spaceport Nova Scotia.

Maritime Launch has also signed a white-label agreement with Scotland’s Skyrora to launch satellites for both Maritime Launch and Skyrora clients, using the Skyrora XL vehicle. Maritime Launch remains on track to bring the medium class launcher, the Cyclone-4M (C4M), developed by Yuzhnoye and Yuzhmash, with a first launch scheduled for 2025. In November 2021, Maritime Launch announced Nanoracks as the first launch client for the inaugural launch of the C4M from Nova Scotia.

The Launch.ctrl platform by Precious Payload is designed to minimize costs and development timelines while maximizing launch schedule reliability and mission assurance. Beyond simply functioning as a marketplace for satellite launches, its templates for mission description and the workplace for team collaboration bridge the gap between payload engineers and a launch provider’s business development, sales, marketing, and launch-management teams.

Earlier this year, Precious Payload successfully introduced a new version of its commercial launch schedule and released individual pages for launch and hosted payload providers, their vehicles, and upcoming missions (with all available launch service operators including brokers, commercial spaceports, and OTVs). Using Precious Payload’s Launch.ctrl platform, any payload developer can find the best commercial launch or hosted payload solution for their instrument or experiment.