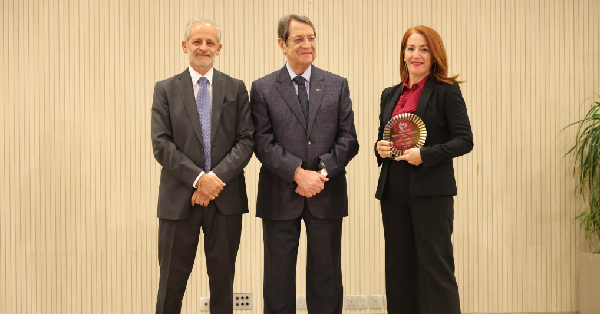 The Cyprus Securities and Exchange Commission received an honorary distinction at the 7th Corporate Volunteering Competition and Volunteering Contribution of the Pancyprian Volunteerism Coordinative Council  for the active participation of its employees in social responsibility actions.

CySEC was granted the Award of Corporate Voluntarism, during the ceremony that took place at the Presidential Palace on Monday, November 28, 2022, on International Volunteer Day, coinciding this year with the 50th anniversary of the PVCC. The award was granted to CySEC by the President of the Republic of Cyprus, Mr. Nicos Anastasiades and the Chairman of PVCC, Mr. Elias Demetriou to CySEC’s Officer, Ms. Nicoletta Livera, who represented the regulator.

For a decade, CySEC has incorporated volunteerism practices into its strategy, which are characterised by team spirit and the active involvement of its employees. Various actions are implemented each year, such as organized group blood donations, the provision of financial support to charity foundations, the collection of foodstuff and clothing for the population in need, the support of vulnerable groups, participation in awareness campaigns and charity events, as well as actions for the protection of the environment, tree planting and the welfare of stray animals.

CySEC’s Chairman, Dr. George Theocharides, referring to the honorary distinction, stated: “We thank the Pancyprian Volunteerism Coordinative Council for this great honour. Social responsibility is an integral part of our Organisation’s culture and of its people. At CySEC, we feel immense joy to help provide support to vulnerable groups. At every opportunity we try to actively strengthen our social contribution, both through our own initiatives and by voluntary participation in activities undertaken by charity associations and foundations”.