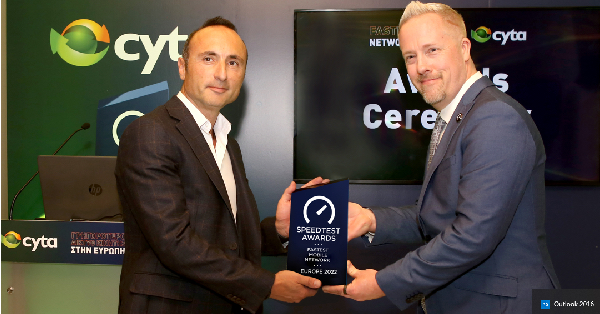 Cyta celebrated its second consecutive award as the fastest mobile network in Europe*, at an event held on Wednesday, December 7, 2022, on the 10th floor of the 360 ​​Nicosia building. The award was presented by the Ookla® CEO, Mr. Doug Suttles who travelled to Cyprus especially for the occasion, in the presence of the Deputy Minister of Research, Innovation and Digital Policy, Mr. Kyriacos Kokkinos, government officials and media representatives.

The CEO of Cyta, Mr. Andreas Neocleous, thanked Cyta’s customers who are the driving force of the Organization’s successes, as well as its people, who work methodically and with passion, facing the most demanding challenges head on. “The Ookla® Speedtest AwardsTMconfirm that Cyta offers its customers the highest level of service and that our country has the credentials that place it among the most technologically advanced nations in the world”.

Referring to the honorary distinction, Cyta’s Chief Technology & Informatics Officer and head of the entire project, Mr. Chrysis Phiniotis, thanked all those who with hard work, team spirit and love for their subject-matter, achieve even the most difficult goals and noted that “This distinction is not just another Cyta achievement. Above everything else, it is an important moment for Cyprus, since for the first time in its history, it is leading the European countries in a field that determines the future and progress”.

Presenting the award, Ookla® CEO Mr. Doug Suttles noted that, “Speedtest AwardsTM, presented by Ookla, are an elite designation reserved for the fastest and top-performing fixed broadband and mobile operators around the world. It is our pleasure to present Cyta with the award for Fastest Mobile Network in Europe. This recognition is testament to their exceptional performance in Q2-Q3 2022 based on Ookla’s rigorous analysis of consumer-initiated tests taken with Speedtest”.

The Sales Director of Ookla®, Mr. Tom Opaczyk, presented to the attendees how the networks are evaluated and noted that “Europe’s Fastest Mobile Network” for top providers in speed, was determined by evaluating each provider’s Speed Score™ in Q2-Q3 2022. To determine the fastest providers for mobile networks in each country, Ookla assesses the Speed Score from all test results taken using Modern Chipsets. To be designated as a top provider, the operator’s Speedtest results must account for at least 3% of the sample size in their geographic areas”.