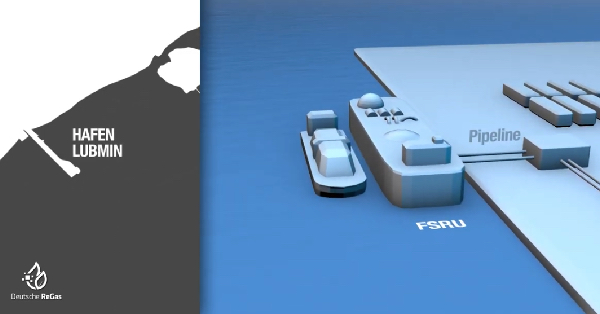 The NEPTUNE enters the Mukran Port. It is the first FSRU (Floating Storage & Regasification Unit) intended for use at a floating LNG terminal in Germany and is now reaching a German port. Here she makes a stop before she will start the final transfer to the industrial port of Lubmin. There it will soon take its place in the first and so far only privately financed LNG terminal that is being developed by Lubmin-based Deutsche ReGas.

“With the NEPTUNE, all the necessary components are now in the region to technically complete the LNG terminal in the near future. Of course, commissioning can only take place once all the necessary permits have been obtained,” says Dr. Stephan Knabe, Chairman of the Supervisory Board of Deutsche ReGas GmbH & Co. KGaA. And Knabe continues: “Here on site, in close cooperation with Mukran Port, it is now necessary to prepare the FSRU for the transfer to Lubmin. To this end, her draft will be reduced from the current 9.6 to around 5.2 metres. This process is called lightening. In addition, a pipe adapter will be installed on the NEPTUNE in order to be able to connect the FSRU to the land-side pipe system in Lubmin with a precise fit.”

Deutsche ReGas has chartered the NEPTUNE from TotalEnergies. Both companies had already signed an agreement on July 13, 2022 in Rostock in the presence of representatives of the federal and state governments.