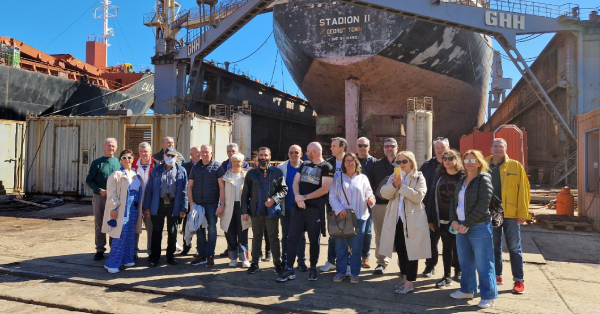 On Saturday 22 October, 30 representatives of AMMITEC (Association of Maritime Managers in Information Technology and Communications) visited the Neorion – ONEX Shipyard in Syros island.

The members were given a tour and guided through by Mr. Grigoris Bilios, the Shipyard’s Security Manager, who informed them about its history during its 160 Years of Operations.

Established in 1861, the Neorion Shipyards is the first heavy industry plant of the Balkans and was the Greek shipyard that constructed the first steam ship in the region.

In addition, the same facilities produced military equipment and in 1973 were the pioneers in manufacturing one of the original concepts of the battery electric car.

After the acquisition by ONEX, the shipyard is entering to a new era of development by expanding its activities to new markets and implementing modern technologies.

AMMITEC is a non-profit scientific association, bringing together the ICT Managers of the global shipping companies and everybody else who is involved in maritime IT & Communications.

It was founded in 2003 and  aims to promote the most efficient usage of modern Technology towards the Digital Transformation in Maritime, by implementing the relevant best practices in the major pillars of the global maritime sector.

Furthermore, AMMITEC focuses in the empowerment of the ICT professionals through the promotion of the new role of IT in the evolving technological era.

The AMMITEC team continued its visit with a tour of Ermoupolis, lunch at a traditional restaurant and other recreational activities.