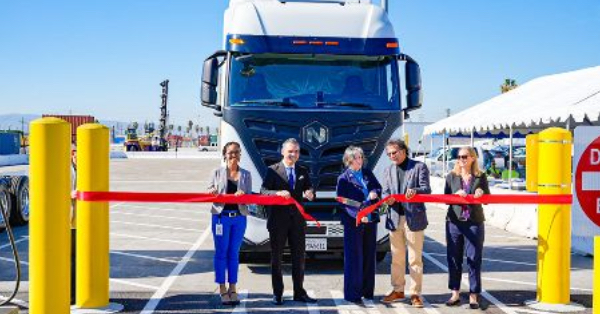 Heavy-duty electric trucks servicing San Pedro Bay port terminals can now charge for free at the Port of Long Beach, which announced it has opened the first two public charging stations in the nation for the vehicles.

The Port has partnered with EV Connect, a leading provider of charge-management solutions for electric vehicles, to provide the stations at the Clean Truck Program Terminal Access Center, 1265 Harbor Ave., Long Beach 90813. View the fact sheet for details and eligibility.

“Southern California will need a network of thousands of heavy-duty charging stations, not only at the ports but all around the region, as society moves to renewable energy to fight climate change,” said Port of Long Beach Executive Director Mario Cordero. “We are proud to lead, support and help accelerate the adoption of these technologies.”

The Port of Long Beach is known internationally as an industry leader in advancing cleaner cargo movement. In order to tackle greenhouse gases and criteria pollutants, the Port of Long Beach has set a goal of all zero-emissions cargo-handling equipment by 2030 and a zero-emissions drayage truck fleet by 2035. About 17% of the cargo-handling equipment at the Port is electric powered, the largest such fleet in the United States. As a signal of zero-emissions progress, in September, the Port announced that a trucking company partner will convert to fully zero emissions by 2025 – 10 years before the 2035 goal. Read more about the project here.

Last month, the Port also announced it will receive a $30.1 million grant from the U.S. Department of Transportation to deploy the nation’s largest fleet of manually operated, zero-emissions cargo handling equipment at a single marine terminal.

Compared to 2005, the year before the Clean Air Action Plan was adopted, the Port of Long Beach has reduced emissions of diesel particulate matter by 88%, nitrogen oxides by 49%, and sulfur oxides by 96%.

The Port of Long Beach is one of the world’s premier seaports, a gateway for trans-Pacific trade and a trailblazer in goods movement and environmental stewardship. The Port handles trade valued at more than $200 billion annually and supports 2.6 million trade-related jobs across the nation, including 575,000 in Southern California.