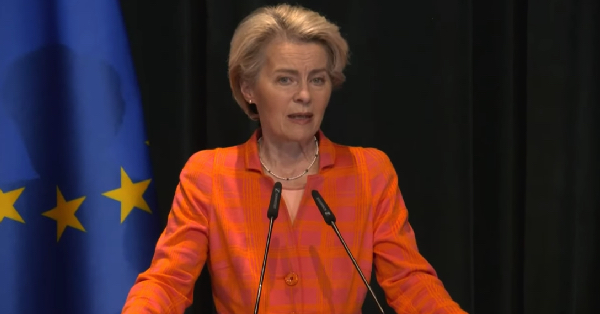 It is “important” that world leaders sit down and discuss the contentious issue of climate reparations during COP27, said European Commission President Ursula von der Leyen. Climate reparations, officially known as loss and damage, refer to the financial payments that developing nations from the Global South demand from the industrialised Global North in order to compensate the irreversible havoc wreaked by the climate crisis.

Low-income countries argue they are disproportionally affected by extreme weather phenomena, such as devastating floods and longer-than-usual droughts, even though their release of greenhouse gas emissions has been negligible compared to that of developed nations. But despite growing calls, wealthy countries have so far refused to commit any money for climate reparations, fearing they might be subject to endless legal claims.

“It is an important topic and I’m happy that it is an agenda item this time at COP27. It was never before,” von der Leyen told Euronews correspondent Jeremy Wilks in Sharm El-Sheikh, Egypt.  Developing countries argue that loss and damage should be paid through a brand-new fund, separate from the $100 billion annual target that the international community is expected to disburse for climate adaptation and mitigation. In her interview with Euronews, Ursula on der Leyen appeared to recognise the need to distinguish both elements of climate finance but did not explicitly endorse the idea of establishing a separate facility.

Instead the focus should be put on re-deploying existing financial sources, she noted. “Now it’s important to sit down and really to define and sort out what is it, and then to look at the funding that is available,” von der Leyen said, without using the term climate reparations, which has politically sensitive implications. “And I’m not speaking of the $100 billion that are for climate finance there. The European Union is also doing its fair share, more than its fair share with €23 billion. But I’m speaking about other funds we have to look at.”

Although COP27 has been partially overshadowed by the Ukraine war and the global energy crisis, expectations are still high. A United Nations report released last month concluded there was “no credible pathway to 1.5°C in place,” a reference to the Paris Agreement’s landmark goal. Speaking at the summit, former US Vice President Al Gore criticised world leaders for their “credibility problem” when it comes to fighting climate change. Asked about Al Gore’s comments, Ursula von der Leyen said it was “important to deliver.”

“At last COP, we made the pledges. This is about implementation,” she said. “And I can tell you from the European Union, we do deliver. You know that we have cast our climate goals in law. And more important, we have put forward Fit For 55, the biggest and most ambitious legislative proposal worldwide to fight climate change,” she said. Fit For 55 refers to the bundle of draft laws aimed to ensure the EU slashes greenhouse gas emissions by at least 55% before the end of the decade.

“Now we’re delivering: for example, we just agreed on the fact that, from 2035 on, any vehicle that comes new to the European market must be emissions-free, or we have a massive investment in renewables right now. So that’s the credibility that you can only deliver,” von der Leyen.