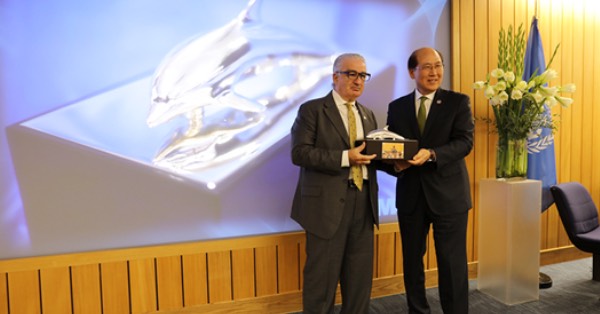 The prize was presented at the annual IMO Awards Ceremony, held in London on 2 November and streamed online. This was the first time since the Covid-19 pandemic that those attending the Awards were together in-person.

Professor Attard was nominated for the award by the Republic of Malta. The prize has been presented annually since 1981 to the individual or organization judged to have made a significant contribution to the work and objectives of IMO. The event also honoured exceptional bravery at sea.

Presenting him with the International Maritime Prize silver dolphin award, IMO Secretary-General, Kitack Lim, congratulated Professor Attard, telling him, “Your long stint at IMLI’s helm has been instrumental in turning IMLI into the world-wide known centre of academic excellence that it is today and has ensured that its work has been recognized by many international bodies including not only IMO’s Assembly, Council and Technical Cooperation Committee but also by the United Nations General Assembly itself. Many delegates present today are here because of their studies at IMLI.”

Mr. Lim went on, “Your impact on the maritime world and on IMO’s work has been outstanding.”

Professor Attard reflected on the long journey since the idea for an international maritime law institute was formulated in the 1980s. “I remain amazed how our ideas were translated into the creation of a programme of studies which brought about a dramatic change to my life and the lives of hundreds of government officials worldwide. Indeed, I wish to record that one of the greatest satisfactions I got in my years of Director was to see the dramatic change in students from the day they arrived to their graduation – when they are fully empowered to serve their countries’ interests and the rule of international maritime law. May IMLI continue with its work in the interests of IMO and its Member States. Long Live IMLI!,” he said.

Professor Attard expressed his appreciation to all those who had supported him in his capacity as IMLI Director. “I would like to record my appreciation to all those who supported me in my capacity as Director. I am grateful to the continuous generous funding which IMLI has received from governments, particularly the government of Malta, NGOs, and the industry. I particularly acknowledge the support of Secretary-General Kitack Lim. Indeed, he holds the record of the Secretary-General who has most visited IMLI throughout his years of office.  He has been responsible for IMLI’s greater involvement in IMO’s work,” he said.

Professor Attard wished his successor well.  “I wish to take this opportunity to urge all Member States to support the Institute and its new Director, Professor Norman Martinez, who already has years of experience in the IMLI way of life.” (Download full speech here)

Professor Attard has had a distinguished career with IMLI since he proposed IMLI’s creation 35 years ago. It was established in Malta in 1988. He became a Member of the IMLI Governing Board in 1989 and was appointed Director of the Institute in 1992.

Several international bodies including the IMO Assembly, Council,  Technical Cooperation Committee and the United Nations General Assembly have recognised the work of the Institute under Professor Attard, which has supported IMO’s goals of promoting safe, secure, environmentally sound, efficient and sustainable shipping through cooperation. He has helped, too, to build a close relationship between IMLI and the World Maritime University, the other global maritime training institution set-up by IMO.

Professor Attard was the first Chair of the Legal Committee of the Intergovernmental Panel on Climate Change (IPCC) and has been praised for spearheading the 1988 Maltese UN Initiative. This led to the recognition of climate change as a major threat to the prosperity and wellbeing of humankind. Adoption of the 1992 United Nations Framework Convention on Climate Change by the Rio Conference on Environment and Sustainable Development, and the subsequent Kyoto Protocol followed.

Since October 2020 Professor Attard has served as President of the Chamber for Marine Environment Disputes. He has also been a judge for the International Tribunal for the Law of the Sea since 2011.