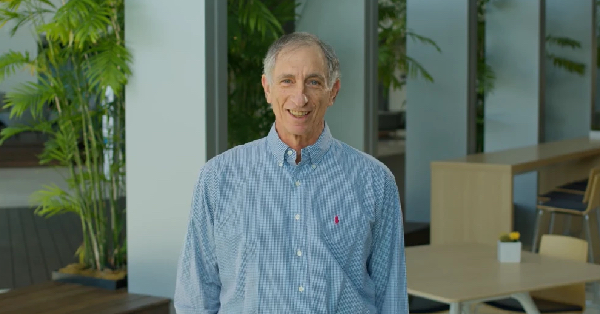 The award acknowledged innovation and achievement in the satellite industry, and leadership in developing and expediting the distribution of new satellite services in the Asia-Pacific region. The third of Viasat’s upcoming ViaSat-3 global constellation will focus on Asia-Pacific.

“We don’t give this every year, and it has to go to a person that has an illustrious career,” said award presenter and APSCC President Gregg Daffner. “This year is no exception in terms of finding someone really special. Mark is an industry expert in aerospace, defense and satellite communications. He’s a leading visionary for a new generation of high-capacity satellite systems — the ViaSat-3 series (and) he is one of the visionaries of our industry.

“He’s outspoken. He’s softspoken. He has creative ideas, great solutions and he’s a pleasure to know.”

Daffner presented the award Oct. 19 during the council’s annual conference, held in Seoul, Korea. While Dankberg could not attend, he sent an acceptance speech filmed at Viasat’s Carlsbad, CA headquarters.

“I feel honored,” he said. “I’ve spent almost my whole career in the satellite communications industry. It’s been enormously rewarding.

“I think now is one of the most — if not the most — dynamic times. We’re seeing some of the older business models declining, but they’ll be replaced by new business models; new technologies that’ll be a lot more exciting, rewarding and will probably grow a lot bigger.”

Dankberg emphasized the importance of having broad representation in space.

“That’s an area where we’ve been thinking a lot. And we’re interested in helping stitch together some of these new global opportunities in terms of technologies and business models.”

He also spoke briefly about the issue of space sustainability.

“Most of the interesting space now is in low-Earth orbits, and low-Earth orbit by definition is bounded,” he said. “One of the questions everybody really ought to be considering is how much is too much — in terms of things like collision risk, the risk of re-entry of enormous amounts of mass, the impact on science and astronomy. And finally, just allocating that space in a way that makes it competitive all around the world, and leaves room for all these nations and regions to participate.

“It’d be kind of sad if the space race turns out to be about who can put the most mass into space the fastest. We think there’s really room for innovation and new technologies in integration and in the business models that’ll preserve competition.”

Dankberg said he looks forward to meeting those challenges.

“These are the kinds of things we’ll be working on,” he said. “Even though it’s a lifetime award, I don’t think I’m done yet.”

The APSCC is a non-profit international association representing all sectors of satellite and space-related industries, and promotes space activities, satellite communications and broadcasting in the Asia-Pacific.