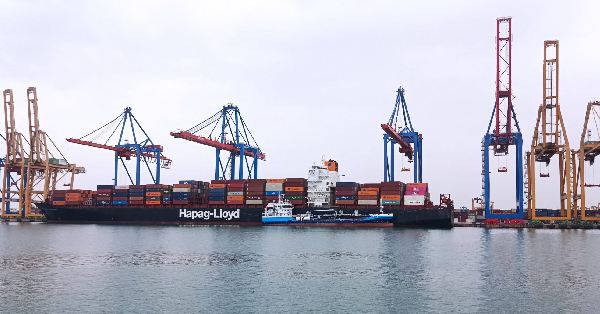 The Valencia Containerised Freight Index (VCFI) in October stood at 4,424.11 points, which represents a drop of -7.1% compared to September

The macroeconomic scenario shows a slowdown in economic activity worldwide

Congestion levels are showing a downward trend, with a reduction of 10.3% in the last week of October

This index is based on the export prices recorded by the Port of Valencia, a benchmark in the world of Mediterranean Sea containers due to its volume

The Valencia Containerised Freight Index (VCFI) for October fell by 7.1% to 4,424.11 points. This decline is shared by all the areas analysed by this index, among which the decrease of 22.1% in freight rates with the Far East stands out, accumulating with this area the sixth consecutive month of decline. The VCFI is calculated based on the export prices recorded by the Port of Valencia, a benchmark, due to its volume, in the Mediterranean Sea container world. Since the beginning of the historical series in January 2018, it accumulates a growth of 342%.

Undoubtedly, the current macroeconomic scenario is playing a key role in the downward evolution of freight price levels. In this sense, global economic activity is experiencing a generalised slowdown, more accentuated than expected, with the highest inflation in several decades. Undoubtedly, the cost-of-living crisis, the tightening of financial conditions in most regions, the Russian invasion of Ukraine and the continuation of the COVID-19 pandemic have a major impact on this outlook.

In the energy and commodities market, the average price of Brent crude oil rose by 3.98% in October to $93.33 per barrel, compared to $89.76 in September, thus accumulating an annual increase of 15.15%. For this purpose, the price of bunkering (refuelling of ships at sea) of the 20 main ports in the world has been considered, according to data provided by Ship&Bunker. Thus, the price of VLSFO (Very Low Sulphur Fuel Oil) has risen from $725 in September to $739.5 in October, representing an increase of 2%.

In terms of capacity on offer, Alphaliner’s data show that the idle fleet has increased compared to the previous month. At the end of October, there were 100 idle vessels accounting for a total of 457,681 TEU (64,969 TEU more than the last figure), representing 1.8% of the total active fleet, which is a notable increase compared to the last month.

It should also be noted that, although pre-pandemic figures have not yet been reached, congestion levels are showing a downward trend. To this effect, global port congestion has been reduced to 10.3% in the last week of October, compared to 8.9% in the previous week. According to the latest data obtained by Linerlytica, port congestion in North Asia, North America and Northern Europe was 32%, 30% and 8% of the total, respectively.

These variations are mainly due to the decrease in congestion in Chinese ports, and beyond the COVID-19 restrictions in the last two weeks, the fall in these congestion levels has, in turn, been driven by the reinsertion of ships at anchorage after the traditional Golden Week. As for the US ports, congestion has been declining, albeit more slowly. Similarly, the European ports are experiencing a slow decline as the North European seaports such as Rotterdam, Hamburg, Bremerhaven and Southampton continue to experience significant berthing delays.

As for the Western Mediterranean sub-index, a decrease of -1.14% is observed with respect to the previous month, standing at 2,178.26 points, and accumulating a growth of 117.83% since the beginning of the series in 2018. Exports from Valenciaport with some of the main markets such as Algeria, Morocco and Tunisia are not going through their best moment. In this way, the specific case of Algeria stands out, where, as has been a constant fact for months now, the trade agreement that the North African government has signed with Spain is still under suspension.

In view of this situation, the decrease in Valenciaport’s export flows with China continues to stand out, coinciding with the festive period known as Golden Week, which took place from 1 to 7 October, also converging with the high season for maritime transport. This fact is in addition to the fall that already occurred in the previous month, and is that, although traditionally shippers anticipated their orders in view of the holiday, this year the situation has already been reversed since the weeks prior to this festive period, resulting in a more accentuated fall during these holidays, which has led to an increase in the number of orders.