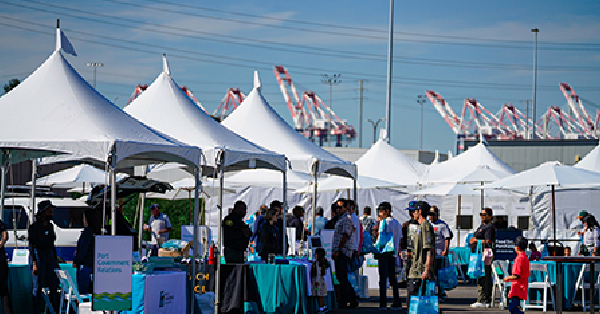 The Port of Long Beach’s ongoing commitment to environmental sustainability and stewardship was on display Saturday during the Green Port Fair, where community members got an up-close look at the trailblazing programs and modern equipment that will reduce emissions for the next decade and beyond.

The free event provided an opportunity for the public to learn more about the Port’s accomplishments in improving air quality and efforts to become the world’s first zero-emissions seaport amid an era of significant growth at the nation’s second-busiest seaport.

“This was a wonderful opportunity for the public to see how we’ve dramatically improved air and water quality, protected marine wildlife, implemented sustainable practices at the Port, and inspired similar initiatives at seaports around the world,” said Long Beach Harbor Commission President Sharon L. Weissman. “We are demonstrating that good jobs and economic development can thrive alongside responsible environmental sustainability initiatives.”

“We are nurturing groundbreaking clean technologies that significantly reduce the impacts of operations and improve air quality throughout the region,” said Port of Long Beach Executive Director Mario Cordero. “The community should be proud of its vital role in helping us get this far, and I ask for their continued support as we make that next great leap and transform into a fully zero-emissions port.”

Visitors were treated to an up-close look at the new equipment that will set the standard for greener cargo operations and strengthen the Port’s commitment to the Green Port Policy and San Pedro Bay Ports Clean Air Action Plan enacted more than 15 years ago.

Displays outlined the Port’s goal of having a zero-emissions cargo-handling equipment fleet by 2030, and zero-emissions trucks by 2035, while engineers were on hand to explain how the planned Pier B On-Dock Support Rail Facility will improve efficiency of cargo movement and lessen local environmental impacts.

The Port of Long Beach is one of the world’s premier seaports, a gateway for trans-Pacific trade and a trailblazer in goods movement and environmental stewardship. As the second-busiest container seaport in the United States, the Port handles trade valued at more than $200 billion annually and supports 2.6 million trade-related jobs across the nation, including 575,000 in Southern California.