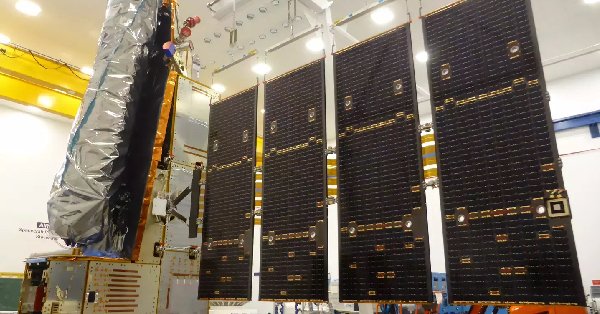 Biomass, the European Space Agency’s (ESA) forest measuring satellite has left the Airbus Defence and Space site in Stevenage and is on its way to Toulouse for final testing ahead of launch.

The comprehensive environmental test programme for the spacecraft will include thermal vacuum tests, mechanical vibration, acoustic and electromagnetic compatibility testing to replicate the conditions during launch and the harsh environment in orbit.

Faced with production and manufacturing challenges caused by the pandemic, the team at Stevenage has successfully completed the mechanical and electrical integration and testing of the spacecraft’s propulsion system, harness and all avionics equipment. The team has also attached and completed deployment testing of the large deployable reflector and integrated the radar instrument within the satellite, finalising the mechanical completion of the spacecraft.

Richard Franklin, Managing Director of Airbus Defence and Space UK said: “Biomass will be able to measure the world’s forests on a global scale – a true world first.  It will give scientists vital information about just how much carbon is locked up and also being absorbed by the “lungs” of the planet enabling better decisions to be made on tackling climate change. This latest milestone builds on the successes of the previous ESA missions Sentinel-5P and Aeolus, confirming Airbus as a leader in Earth observation and environmental monitoring satellite manufacturing.”

Dr Paul Bate, CEO of the UK Space Agency said: “It’s exciting to see ESA’s forest mission, Biomass, built with backing from the UK Space Agency, setting off to prepare for its mission. It’s the first satellite capable of studying the world’s forests in three dimensions, providing valuable data on how they store carbon. With this information, organisations and authorities around the world will be able to measure key changes in our forests, predict what the impact will be, and take early action to prepare for, or even correct, that, as well as work towards critical net zero targets. This is a ground-breaking programme made possible by UK expertise in Earth observation science and we are proud to be a part of it.”

ESA’s flagship Earth Explorer mission will measure forest biomass to assess terrestrial carbon stocks and fluxes at an altitude of 600km above the Earth. The spacecraft will carry the first space-borne P-band synthetic aperture radar, delivering exceptionally accurate maps of tropical, temperate and boreal forest biomass that are not obtainable by ground measurement techniques.

Twenty engineers from the UK based team will lead the test campaign in Toulouse, supported by colleagues on site and from Airbus in Friedrichshafen.

Alongside testing, the UK team will prepare for the in-orbit commissioning and operational phases, with a separate team managing the delivery of the ground calibration transponder, located in New Norcia, Australia.

Biomass is set to launch from Kourou, French Guiana on a Vega rocket in 2024, and is scheduled to operate for five years.