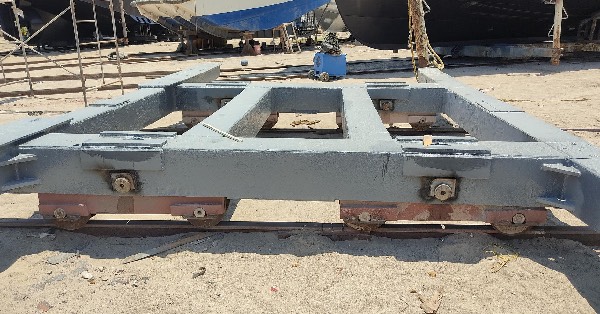 The marine railway at the Senasa Shipyard in Mazatlán, Mexico is fully operational following a complete bearing change to Thordon’s grease-free ThorPlas-Blue bearings.

The operator converted to ThorPlas-Blue to support increased workboat loads and to reduce shipyard downtime due to frequent emergency repairs to the original bronze bearings in the loading wheels of the ship cradle.

Senasa Shipyard, a busy service station for workboats, shrimpers, trawlers, and patrol boats operating on Mexico’s Pacific coast, operates a 300-ton capacity marine railway, or patent slip, which uses a large cradle on rolling stock to hoist vessels out of the water and up an inclined rail track.

The challenge was with the wheels, which were fitted with bronze bushings that were unable to support the ship loads typically encountered by a yard of Senasa’s size.

According to Arturo Selvas, Managing Director of TZ Industrias, Thordon’s authorized distributor in the region, the bronze bushings were lasting for just two years, causing many headaches for the yard.

Adalberto Osuna, Naval Architect, Senasa Shipyard said: “When TZ Industrias visited the yard and showed us the Thordon bearings that were fitted to other marine railways, it was a no-brainer for us. Arturo recommended ThorPlas-Blue for this application based on the load requirements, ease of installation, and the self-lubricating properties of the material, which we retrofitted in July. So far, so good.”

Thordon anticipates that the ThorPlas-Blue bearing material will last at least three times as long as the original bronze bushings.

“The shipyard manager has already said ship hoisting is much smoother and requires less effort because the friction is much lower with ThorPlas-Blue compared to the original bushings,” said Selvas. “Based on this, the yard is now considering ThorPlas-Blue for other railways, including those designed for larger ships.”

“It is not uncommon for our bearings to be used in this type of application and other ship repair yard facilities, such as dock gates, water pumps and cranes due to the ability of the material to withstand extreme loads,” said Jason Perry, Thordon Bearings’ Regional Manager – North America.

Referring to a 2018 retrofit to Comeau Marine’s 600-ton capacity railway, one of Nova Scotia’s oldest patent slips, Perry said the operator had tried all types of bearings, including phenolics, bronze, Lubrite®, before discovering ThorPlas-Blue.

Developed as a maintenance-free solution to replace greased bronze bearings, ThorPlas-Blue is a homogeneous, self-lubricating polymer bearing capable of withstanding operating pressures up to 45 MPa (6,527 psi). It does not require greasing as lubricants formulated throughout the homogenous polymer matrix provide low, stable friction coefficient, even as the bearing wears.