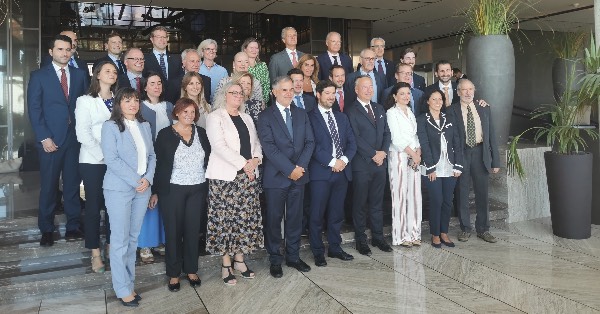 The European Community Shipowners’ Associations (ECSA), which represents national shipowners’ associations of EU Member States, organised for the third time in Cyprus, following a relevant invitation by the Cyprus Shipping Chamber and the Cyprus Union of Shipowners, its Board of Directors Meeting on 7 October 2022, in Limassol.

It is worth mentioning that this meeting was of particular importance, as it is being held for the first time in Cyprus under the Presidency of the Cypriot Past President of the Shipping Chamber, Mr. Philippos Philis. The Cyprus delegation, which represented the Cyprus Shipping Industry, included the Cyprus Shipping Chamber’s President, Mr. Themis Papadopoulos and its Director General, Mr. Thomas A. Kazakos, as President of the ECSA State Aid Committee and Mr. Nicolaos Hadjioannou, from the Cyprus Union of Shipowners.

The main topics discussed during the Board Meeting, were the measures taken by the EU Shipping Industry to achieve the goal of zero emissions from ships by 2050 through a comprehensive climate strategy being prepared by ECSA. In addition, the Organisation’s overall Strategy was completed aiming to further strengthen its competitiveness and the representation of European shipowners’ interests toward EU policy makers.