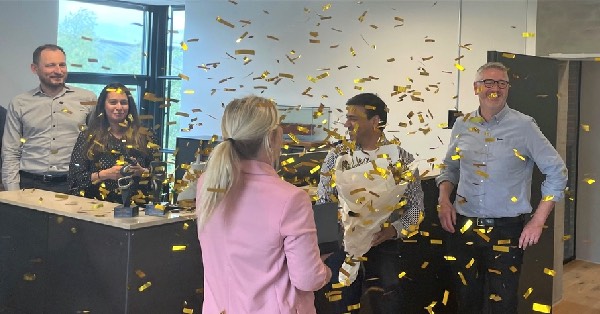 First winner of Danish Shipping’s new diversity award has been found. It is Hafnia who gets the award in a very strong field consisting of NORDEN, DFDS and Maersk Tankers.

Confetti fell and champagne popped when the employees at Hafnia today got the news that they had won Danish Shipping’s diversity award.

A jury has evaluated the four finalists and Hafnia wins the award, among other things, because of their different, refreshing, and innovative initiative.

Hafnia has created a platform across several shipping companies in which everyone can bring their ideas for concrete initiatives that can be spread out wide and create better diversity. A kind of competition or think tank where the best initiatives have the potential to reach out way further than just one’s own workplace.

“Progress through collaboration and a collective approach to address change is the tangibility we at Hafnia have been pushing for. We should all continue to address the challenges at an organizational level, but when we come together and lead the change in the industry as a whole, it becomes a game changer.  I congratulate my colleagues leading this initiative, especially Shanker Pillai (Hafnia’s Head of Innovation) and Richard Holdsworth (Founder, V-Box), who have been the true drivers of this award-winning initiative,” says Mikael Skov, CEO in Hafnia

“Today coincidentally marks the final day of the 2022 Maritime DEI Lab. We have received a vast number of submissions from all over the world, from those onshore and at sea. Thank you to everyone who participated. All your contributions make a difference to evolving the maritime reality. Thank you also to this year’s partners who included Anglo American, RightShip, Rio Tinto, Thome Group, and Wilhelmsen. We look forward to together sharing the results of this year’s competition in due course, says Mia Krogslund Jørgensen Head of People, Culture and Strategy in Hafnia.

”It is a very impressive and innovative project that Hafnia has created. It involves employees in a very wide sense, both at sea and on land, and is not just placed in a small circle of people, and then it is created in cooperation with several shipping companies, meaning that good ideas have the potential of getting out even further”, says Anne Windfeldt Trolle, Executive Director at Danish Shipping.

She was one out of five jury members who have read and voted amongst the diversity initiatives from the four shipping companies NORDEN, DFDS, Maersk Tankers and Hafnia.

”It was really difficult to choose a winner and it was a very close run. The initiatives are rather different but what they all have in common is that they are very serious about bettering diversity and that they contribute to bringing about real change. I am very impressed with the finalists, and I think it looks very positive for the ongoing work on diversity and equality in the shipping companies”, says Anne Windfeldt Trolle.

Hafnia’s winning initiative is called “Maritime Diversity, Equity & Inclusion (DEI) Lab”. It is created together with RightShip, Wilhelmsen, Thome Group, Rio Tinto and Anglo American, and it is a kind of diversity think tank.

First result of the think tank is called SeaCode and is a platform – an app in which both women and men at sea, who have experienced harassment or bullying, can share their experiences and seek advice and help. At the same time, it brings about the opportunity to gather important statistical material that can be used to tackle and drive processes of transformation across the sector.

The three other shipping companies were nominated for the following:

NORDEN: The company has introduced a “parents’ package” to ensure full pension during maternity leave, and in Denmark, 24 weeks of paid leave for both the father, mother, and adoptive parents. Pension payment has among other things been introduced to reduce the gap that often exists between men’s and women’s pensions due to maternity leave during working life. At the same time a mentoring system has been established to create a space to talk about the challenges that can arise when starting up work again after ended maternity leave and parental leave.

DFDS: The shipping company has set a target of 30 per cent women in the company in 2023. The target has been reached in the board and in several offices and a “diversity reporting” has been introduced as part of the quarterly reports. A long list of initiatives has been launched to reach this goal.

Maersk Tankers: The shipping company has introduced a new equality strategy (Diversity, Equity and Inclusion) and a continued focus on employing 50 per cent women in new positions. The results are clear. The share of women employed in Maersk Tankers has increased from 30.5 per cent in 2020 to 35 per cent and in 2021, 55 per cent of new recruitments were women.

”NORDEN has grabbed the bull by the horns and improved the terms for pension and parental leave. DFDS has already increased the percentage of women employed and is following this work closely quarter after quarter. And Maersk Tankers has through a targeted strategy succeeded in hiring more women than men last year and is on its way towards a better gender balance. They are all very impressive initiatives”, says Anne Windfeldt Trolle.

The members of the jury are: