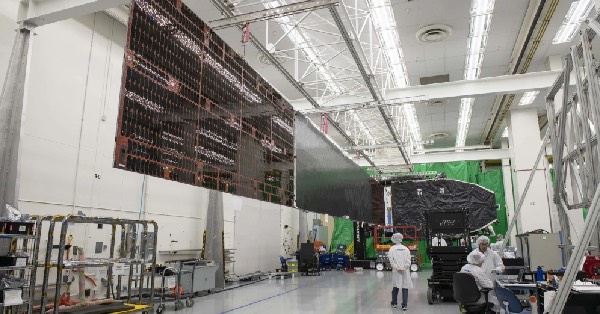 Viasat, a global leader in satellite communications, announced today the completion of the integration of the first ViaSat-3 satellite, marking the first time the satellite is in its flight configuration. The ViaSat-3 satellite has now entered the mechanical environmental testing process, simulating the vibration and acoustic environments that the satellite will experience during the launch and early transfer orbit phases of its mission, in preparation for launch later this year.

During the integration process, the solar arrays, reflectors and other items were attached to the satellite, bringing it to its full, flight configuration for the first time. The satellite’s reflectors will be some of the largest ever sent to space, along with its solar arrays, each featuring eight panels with an overall wingspan of 144 feet, similar in size to that of a Boeing 767 airliner.

“This marks the first time our satellite is in flight configuration which is a huge milestone for our hard-working team and a major step to the deployment of the ViaSat-3 constellation,” said Dave Ryan, president Space & Commercial Networks at Viasat. “This next phase of testing will confirm that our satellite can survive the rigors of launch and begin its mission as planned.”

The ViaSat-3 class of Ka-band satellites is expected to provide the best bandwidth economics in the industry with substantial flexibility to move and concentrate that capacity virtually anywhere there is demand – whether it is on land, in the ocean or in the air. The first two satellites are planned to focus on the Americas and on EMEA, respectively, and the ViaSat-3 EMEA satellite is still undergoing integration at our spacecraft partner, Boeing. The third ViaSat-3 satellite is now undergoing final payload integration and testing at Viasat’s Tempe, Arizona facility and will focus on the Asia Pacific region, completing Viasat’s global service coverage.