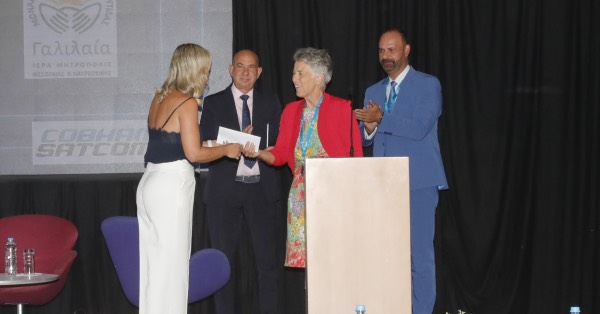 On September 15th, 2022 a handover ceremony was held during the 1st CSN Greece Shipping ICT conference and granted financial donation to the Palliative Care Unit Galilee in total amount of Euro 3750 resulting out of the charity sponsorship from Pioneer Marine and the donations from the delegates of the conference.

The cheque was handed by the CFO of Pioneer Marine, Korinna Tapaktsoglou to the hands of Aliki Tserkezoglou, Gynecologist-Oncologist, Director of the Unit. Ms. Tserkezoglou in her thank you speech mentioned that “this donation will be used to support the work of the Galilee. Patients receive care free of charge and any donation makes a real difference to the patients and their families”. Ms Korinna Tapktsoglou thanked CSN for inviting Pioneer Marine as charity sponsors and mentioned that she admires what Galilee does and urges other companies to include Galilee in their donation plans.

The Managing Director of Cyprus Shipping News, Adonis Violaris thanked Pioneer Marine, Galilee and the participants of the conference for their generous donation and mentioned that “This is in line with the company’s ongoing corporate social responsibility toward our fellow citizens. The next ICT conference will be in Cyprus and the association where the donation will go to is “Voice for Autism” with Island Oil Holdings being the charity sponsor of the Cyprus event”, he added.