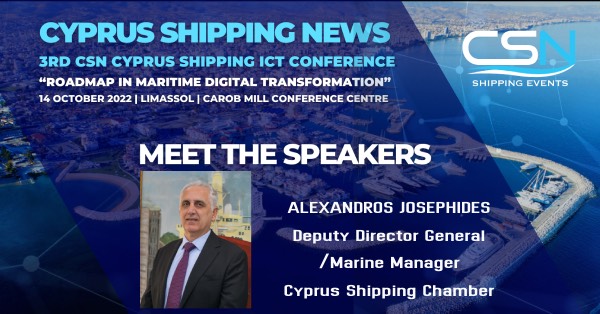 Alexandros Josephides was born in 1962. He holds Bachelor’s and Master’s degrees in Mechanical Engineering. He started his career as a Mechanical Engineer in 1986 and worked in the US, Cyprus and Libya for different companies. In 1992 he joined the Cyprus Bureau of Shipping where he received training and worked as a Marine Surveyor. In 1995 he moved to the Cyprus Shipping Chamber (CSC), the trade association of the shipping industry in Cyprus, where he currently serves as Deputy Director General/Marine Manager. In 2015, following a proposal by the Cyprus Maritime Administration, he was appointed by IMO as “IMO Maritime Ambassador” for Cyprus specifically tasked to promote maritime and seafaring professions to the young generation.