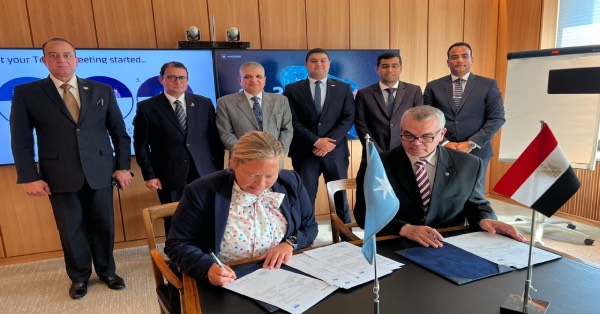 Adm. Osama Rabie, Chairman of the Suez Canal Authority, started his foreign tour by meeting with Mr. Keith Svendsen, CEO of APM Terminals and the senior management team of the APM Terminals Maasvlakte in the Port of Rotterdam. During the meeting, Adm. Rabie attended a presentation by Mr. Jan Bauza, Managing Director of APM Terminals’ Maasvlakte container terminal, from which he learned about the capabilities of the terminal, as one of the most advanced and modern European container terminals where all container handling operations are managed through advanced technological systems that allow all relevant operations to be done automatically and without the need for human intervention, except for performance monitoring only.
Furthermore, Svendsen reviewed the Group’s plan to develop the Suez Canal Container Terminal (SCCT) in East Port Said, where SCA is partner, to transform it into a global hub for container handling in the eastern and southern Mediterranean region, where the group intends to invest $ 500 million, by operating a new 1,000-meter container quay adjacent to the existing 500-meter one, with an increase in the number of cranes to 30, all powered by electricity instead of diesel, in a serious step to reduce the terminal’s emissions and transform it into a green terminal by the end of 2030. They also discussed the plan of the Board of Directors of A.P. Moller-Maersk to transform SCCT into a smart terminal operated by the latest systems and advanced means of communication for container handling.
Following that, Adm. Rabie and the accompanying delegation went on a demonstration tour of APM Terminals’ Maasvlakte container terminal in the Port of Rotterdam to review the smart system for loading, unloading and transporting containers without human intervention, using a group of smart cranes for automatic loading, unloading and storing containers, as well as the use of Self-driving cars to transport containers from one place to another, and the extensive use of clean energy in the terminal, with the aim of transfer this experience to SCCT in the upcoming period.
H.E. then met with the management team of the Port of Rotterdam in the Netherlands, and accompanied them on a cruise to review the entire port, which annually receives about 30,000 ships of various types and provides 6.2% of the Netherlands’ GNP, and is considered one of the largest ports in the world that provides ship bunkering services.
The following day, Adm. Rabie headed to Denmark where he met Mr. Søren Skou, CEO of A.P. Møller Mærsk A/S, and Ms. Henriette Thygesen, CEO of Fleet and Strategic Brands at A.P. Moller – Maersk, to discuss plans to develop SCCT in East Port Said Port into a smart and environmentally friendly terminal. That is in addition to discussing ways to enhance the transit rates of Maersk ships through the Suez Canal by means of attracting new ships to enter East Port Said Port and transit the Suez Canal, either before or after entering the port.
As a culmination of the extended strategic relations between the Suez Canal Authority and A.P. Moller-Maersk Group, Adm. Osama Rabie, Chairman of the SCA, and Mr. Søren Skou, CEO of A.P. Møller Mærsk A/S, witnessed the signing of a bilateral cooperation agreement covering several areas. This bilateral agreement was signed by Eng. Gamal AboElkhair, Director of the SCA’s Transit Department, and Ms. Thygesen on behalf of Maersk.
Adm. Osama Rabie concluded his four-day foreign tour in the Netherlands and Denmark, that took place from August 7th – 10th, during which he aimed to discuss ways to enhance joint cooperation with the global Maersk Group by signing a bilateral agreement in areas of common interest.