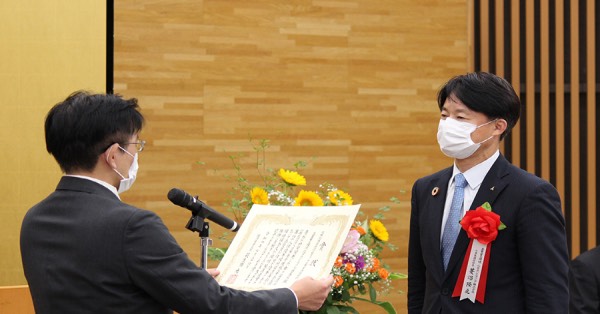 JSIM’s Outstanding Environmental Systems Awards were inaugurated in 1974, with support from the METI (at that time, Ministry of International Trade and Industry), to promote research and development of environmental protection technologies and promote the adoption of outstanding environmental systems. Nominations for the awards are submitted by environmental system manufacturers and environmental engineering firms nationwide, and the award recipients are selected by a committee of experts based on criteria including innovativeness, economic merit and future potential. In addition to the METI Minister’s Award, other awards are presented in the names of the Director-General of METI’s Industrial Science and Technology Policy and Environment Bureau, Commissioner of METI’s Small and Medium Enterprise Agency (SMEA), and the JSIM President.

MHIEC’s V-type stoker system for waste incineration with forward acting grate-bar incorporates improvements and advances from the company’s earlier conventional type of stoker. It was developed to provide stable incineration and reduced volume of waste with wide-ranging properties and in diverse states, to contribute to reducing environmental load. The stoker structure and incinerator shape have been optimized so the surface of the stoker grates is directed at the center of the flame during all processes: drying, combustion and post-combustion. The foremost benefit derived from these innovations is the ability to receive radiant heat efficiently as the waste is combusted, enabling a reduction in the proportion of residual waste in the ash left after incineration.

Efficient use of radiant heat also enables downsizing of the stoker, saving space for boiler house which typically requires significant space within a waste-to-energy plant. These improvements enhance freedom in planning installations at sites where available space is limited. MHIEC delivered its V-type stoker system of which plant went into commercial operation in January 2021 and is operating smoothly up to today.

MHIEC has strengths in developing environmental system technologies cultivated over many years, and now, after receiving the latest JSIM award, the Company renews its determination to apply those strengths to the construction and operation of waste-to-energy plants that contribute to alleviating environmental impacts. In these ways MHIEC will make significant contributions to achieving the SDGs (Sustainable Development Goals), solving global environmental issues, and realizing a carbon-neutral society.