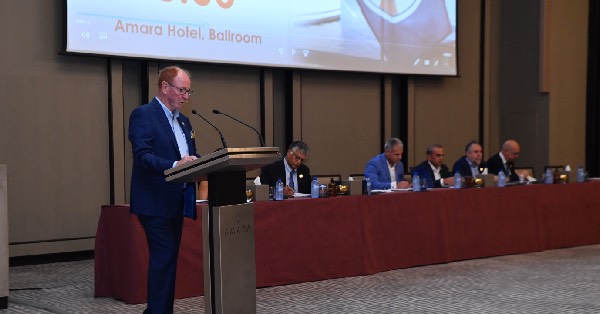 The EGM and AGM, Election to Board of Directors took place on  Friday, July 1st at Amara Hotel, Limassol.

Directly after the EGM, Capt. E. Koch opened the AGM with his Annual Report in which he has  shared  his feelings about the presidency so far :

“It is with great pleasure that I address you for the 6th time with my speech as President of the Cyprus Marine Club, a position I gratefully have been elected to since 2018. To welcome the happy faces at our events and representing the Club is an honour that gives me a lot of personal attainment. “

Despite Capt. Koch reference to the difficulties in Europe (ongoing Covid, and war in Ukraine), the President’s conclusion was, as always,  hopeful :-

“Considering myself an optimist, however, I believe or, at least, I truly hope that as with all difficult challenges we will be able later this year to embrace the future with a positive outlook”.

Capt. Koch thanked Members and Board Members for their support in the last two years which contributed to great success. Furthermore, Capt. Koch shared his warmest appreciation for his fellow Board Members.

“ By all accounts, despite the mentioned challenges last year has been a very successful one for the Club. This would not be possible without the hard work and perseverance of the Board and the volunteers, all of whom have contributed their time and skills to improve and sustain our Club” .

A very special Thank You was given to all Club’s sponsors’ thanks to which the CMC may continue to be in solid financial health:-

“As a non-profit organization, our goal is to provide a value-added event that is affordable for members while maintaining the financial strength, and flexibility of the CMC” – the President concluded.

The great closure of the AGM  was the announcement of the newly elected Board Members for the years 2022-2024.

Board of Directors of the Cyprus Marine Club:-

The president announced the new Board of Directors during the beautiful CMC Annual Dinner in the splendid Amara Hotel Garden near the sea. A total of 150 Members and guests  have joined to celebrate with Cyprus Marine Club,  including H.E. Shipping Deputy Minister to the President , Mr. V. Demetriades, and H. E.  Permanent Secretary of the Deputy Ministry of Shipping,  Mrs. Liana Charalambous Tanou.