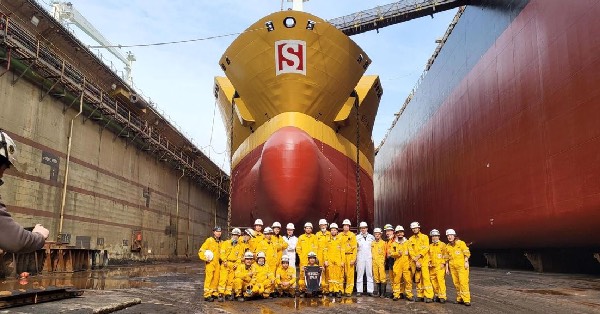 Stolt Tankers is delighted to announce that the team on board Stolt Span has been named as Ship of the Year 2021.

The 22,000 deadweight tonnage (dwt) Stolt Span not only scooped the top spot, but did so in great style as she has previously never featured in the top-five rankings of the competition.

It was a crowded space at the top of the leader board this year, with only one point separating the top two ships. Stolt Vision sailed into second place, while tying for third place were Stolt Courage, Stolt Efficiency and Stolt Sea.

“I am immensely proud of the progress made by all our ships this year, despite the ongoing challenges caused by the pandemic,” said Managing Director, Maren Schroeder. “Our seafarers have demonstrated just how resilient they are, even in the face of extreme adversity, and I am very thankful to them for all that they do.

“The competition reflects Stolt Tankers’ focus on operating with the highest levels of safety to deliver world-class service to our customers. This year, for the first time since 2019, our onshore team hopes to be able to join our winning crews onboard in celebrating their achievements.”

Superintendent, Dirk Martel who is responsible for the overall operation of the winning ship said: “The crew and officers onboard the Stolt Spanhave shown great perseverance in order to maintain the ship’s safe working environment. Not least because she is an older lady and they have worked hard to keep her in good shape. Their hard work and dedication has finally paid off with achieving the Ship of the Year award for 2021. A well-deserved reward after so many years!”

David McKellar, Fleet Manager – Europe, added: “t’s very nice for the Europe fleet to be on top again and I was pleased to see so many of the European fleet feature in the top ten. I was impressed by the consistency in performance across all ships.

“2021 showed that the high levels of effort put in by our superintendents is producing the great results that are delivered by our crews. Stolt Spanhas significantly improved her performance since 2020, well done to Dirk Mantel and the rest of the team for their focus and efforts in turning things around.”

Dirk Holmen, Fleet Support Director, who has been overseeing the competition for more than a decade commented: “It was nice to see it’s not lonely at the top! We are continuing to see improvements across the fleet every year. Congratulations to Stolt Span and all of the runners-up.”

About the Ship of the Year competition

Stolt Tankers’ annual Ship of the Year competition increases awareness of health and safety procedures and raises standards across the fleet. Each year, ships are assessed on a range of performance criteria – covering safety, port state and customer inspections, audit results, off-hire, claims and cost-efficiency – and the winner and runners-up receive a donation to the ship’s communal onboard welfare fund.

The competition is ultimately a celebration of the hard work, dedication and strict adherence to health and safety procedures that go into serving Stolt Tankers’ customers and that are practiced by all crews every day. A separate competition is organised for the SNITS fleet of tankers and inland barges.