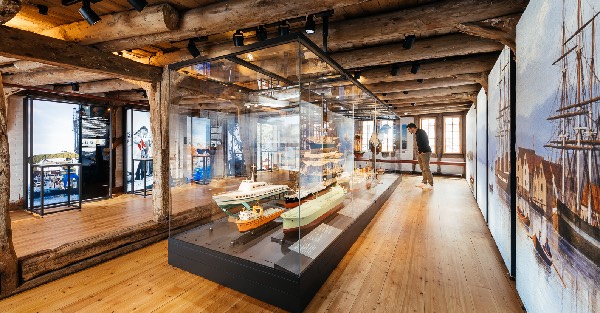 In the harbour of the Norwegian town of Stavanger, the new permanent exhibition “Homeport Stavanger”, designed by ATELIER BRÜCKNER opens on 13 May. It is located in the historical storehouses to which merchant vessels delivered their goods directly right up until the end of the 20th century. Since 1988, the Stavanger Maritime Museum has been housed here – an ideal place for everything to do with the history of shipping, shipbuilding and trade.

ATELIER BRÜCKNER designed the exhibition as a two-part presentation, whose structure and design refer to the architectural substance of the buildings. Contentwise, the exhibition asks: “What is a harbour? ” and “Who is a harbour?”. Beam ceilings and floorboards of solid wood dominate the exhibition spaces. The austere, slim exhibition furniture based on anthracite-grey steel frames is in stark contrast to all the wood.

First, the visitors enter the “What is a harbour?” exhibition room on the ground floor of the first storehouse. Large-scale pictures, photographs and illustrations conjure up a lively impression of the harbour. The right-hand longitudinal wall presents the harbour: as “home port”, as trading centre and global handling location, as home of the maritime industry with its shipping lines and also as employer. Themed exhibit tables invite the visitors to try things out. They can, for instance, try their hand at tying sailor knots or feel the textile samples that are displayed here as examples of the numerous trading goods.

Beyond the harbour lies the sea; in the exhibition room demarcated by historical support beams. An illuminated picture of the painting “View to Strømsteinen” from 1869, mounted over eight metres, forms the background motif for 16 ships which seem to be setting sail here. The fleet consisting of precisely reproduced model ships reflects the diversity of the ships that have docked in Stavanger over the past 200 years and that hail from the local shipping lines.

A canon creates a direct connection to the exterior. It stands in a window opening of the room that has been designed to look like a showcase, enticing passers-by on the busy quay outside to take a look into the museum at any time.

In contrast to the first room, the second room “Who is the harbour?” is organised chronologically and tells the story of the harbour from the perspective of individual protagonists. Five themed islands explore a relevant period through personal stories and exhibits. A replica of a handwritten letter from Elise Eskildsdatter, for instance, is the visual hook for the Middle Ages chapter. Elise lived in the 15th century and was a well-known pirate. The letter that she wrote in 1455 was addressed to the king, the Lübeck city council and the Pope in Rome, demanding compensation for the death of her husband and son. The shipbuilders “Hans and Henrica”, the castaway “Thomas”, who made it back to Stavanger, and the radio operator Frida are the subject of further stories through which the visitors to the exhibition are immersed in the various eras. Frida was one of the first female radio operators. Her uniform is on display with several related photos. Finally, the station entitled “You” tells the current story of the harbour in which visitors, tourists and locals become the protagonists as they see themselves in a mirror.

A media table at the centre of the room provides an overview of the historical periods. Maps, photographs and documents, sorted by theme and category, can be digitally controlled. At the same time, they are projected onto the wall behind. Emerging from the past, they now appear in the current space for which they laid the foundations. The exhibition concludes with the question: What do you know about seamen´s sayings and legends? On one side of revolving panels are the questions, on the other side the illustrated answers. Would you have known them?

ATELIER BRÜCKNER is one of the world’s leading exhibition designers. With offices in Stuttgart and Seoul, the agency that was founded 25 years ago is led by Shirin Brückner, Prof. Eberhard Schlag, Britta Nagel and René Walkenhorst. 120 employees contribute to the development of narrative spaces for museums, brand and visitor centres. The focus is on emotionally conveying content in a long-lasting experience.