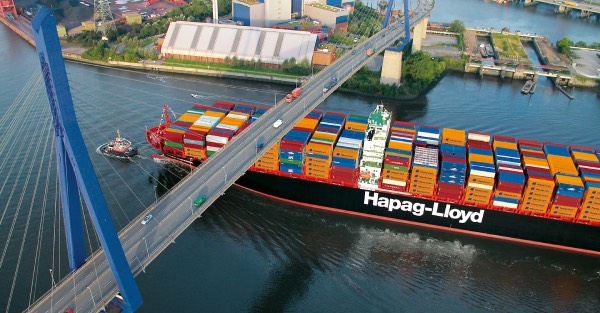 Even during the pandemic, the positive trend in container traffic between Hamburg and the USA continues. Since 2019, the USA has been Hamburg’s second strongest trading partner for seaborne trade after China.

US economic activity directly reflects private consumption. Germany Trade and Invest (GTAI) speaks of an interplay between consumption and economic growth: Higher consumption makes for faster economic growth, and vice versa. After lockdowns and other restrictions affected purchasing power in 2020, this year consumer spending is booming. That’s due primarily to a number of pump-priming US government programmes to boost the economy.

This also shapes the USA’s foreign trade. Hamburg is a central hub for German trade with America. A total of 591,000 TEU were shifted in crisis year 2020. For the first 10 months of 2021, the figure reached 516.000 TEU, representing 5.6 percent growth and feeding hopes of a new volume record by year-end. Volumes have been growing steeply ever since 2019: the four additional THE Alliance Transatlantic services have established the USA in second place among Hamburg’s top partner countries.

Hapag-Lloyd container shipping line has been directly involved in this success. “After the steep decline at the start of the pandemic, North America posted a gradual recovery, which has massively accelerated since the second quarter of this year. Strong growth in the market is also reflected in both export and import volumes,” says Nils Haupt, Hapag-Lloyd’s Senior Director Corporate Communications. Hapag-Lloyd fills a decisive role in the USA trade. The company is not only the leader in the trade between Hamburg and the USA. Handling an estimated two million standard containers in the last five years, seen overall Hapag-Lloyd also takes first place among the most important shipping companies for the Port of Hamburg.

The company calls 14 ports on the US East coast between New York and Houston. On the West coast, it serves Los Angeles, Long Beach and Oakland in California, plus Seattle in Washington state. Most of these ports continue to be plagued by persistent ship bottlenecks. Global supply chains under pressure, terminal closures in China at intervals and staff shortages cancellations due to sickness lie behind this. Hapag-Lloyd is also affected by ports overloads and ship blockages in the USA. Yet the company has been able to react flexibly, temporarily re-routing the AL3 service in November, for instance. According to Hapag-Lloyd, this serves “optimization of our range of services, stabilization of schedules and adaptation to market requirements.” The rotation now runs via Jaxport in Jacksonville, instead of the Port of Savannah.
Ten liner services currently link the Port of Hamburg with the East and West coasts of the USA. Along with Hapag-Lloyd, other major shipping companies like CMA CGM, HMM, ONE and Yang Ming serve the trade. Apart from six container services, one combined container/RoRo cargo and three multi-purpose services are handled. The last three are especially suitable for project and other general cargoes. In addition, three container services serve with ports on the North American West coast.

Hamburg is therefore solidly positioned in the USA trade, which over the past year has proved crisis-proof. Despite the current fraught situation in US ports, for the moment the outlook remains positive.