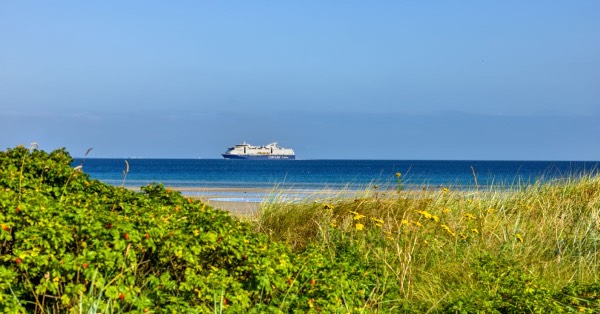 The PORT OF KIEL has set itself the goal of reducing all of its carbon dioxide (CO2) emissions to zero by 2030. The path to climate neutrality is described in a three-step plan that puts the port’s BLUE PORT concept into concrete terms and was unveiled on 24th November with the first presentation of the environmental report. Dr Dirk Claus, Managing Director PORT OF KIEL: “We support the climate protection goals of the State Capital City of Kiel and are taking a pioneering role in terms of CO2 reduction. The port will be climate-neutral by the end of this decade.” The port’s three-step plan envisages covering 60 per cent of the energy requirements of ships calling at Kiel with green electricity as early as next year. By 2025, this figure is expected to reach 80 to 90 percent, before climate neutrality is achieved for all activities of the PORT OF KIEL in 2030 through the interaction of a wide range of measures. Emissions of nitrogen oxides and particles will also be further reduced by the measures introduced. However, these are already being dissipated in the background pollution today and are well below the applicable limit values.

According to the environmental report, the PORT OF KIEL already avoided more than 6,200 tonnes of CO2 in 2020, while almost 18,800 tonnes were still emitted. Dirk Scheelje, chairman of the PORT OF KIEL supervisory board and member of the Bündnis 90/Die Grünen council faction: “With the presentation of the environmental report, emissions are quantified and thus transparent for the first time. It shows that the BLUE PORT strategy initiated in 2018 is having an effect. We will also assess further progress on this basis.” Measures to supply all port facilities with 100 per cent climate-neutral green electricity have already been implemented. In addition, the energy demand at the terminals has been sustainably reduced by switching to economical LED technology and increasing energy efficiency, while at the same time photovoltaic systems provide around 290,000 kilowatt hours of solar energy every year. The PORT OF KIEL offsets the footprint of its business trips and is gradually converting its own vehicle fleet to electric drive. Incentives are provided to customers to promote the decarbonisation process.

On-shore power is a key element in reducing emissions in Kiel. After a first system for shore-side power supply was connected to the grid at Norwegenkai in May 2019, a second, larger system was commissioned at Ostseekai in June this year. From there, Stena Line ferries are regularly supplied with green electricity and, for the first time, two cruise ships, the “AIDAsol” and the “AIDAprima”, could also be connected. Dirk Claus: “We have created the infrastructural basis so that ferries and cruise ships can berth in the city port without emissions. In the coming year, we want to handle 60 to 80 cruise calls at the Ostseekai in a climate-neutral manner and are starting with the construction of an on-shore power plant for the Ostuferhafen as well.” In order to make the processes at the freight terminals even more efficient at the same time, the Federal Ministry of Transport and Digital Infrastructure (BMVI) is funding the establishment of a digital test field in the port. Operational processes will be optimised and made more sustainable on the basis of a 5G campus network. In this way, climate-neutral growth in port handling is to be supported by innovative IT technology.