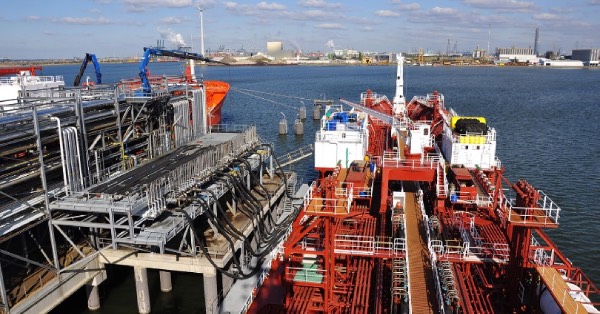 Over pressurization of vessel tanks when shore pipelines are cleared can cause physical distortion and even rupture of the tanks. Overfill of tanks during pipeline clearing can also result in pollution or personal injury when product escapes through the pressure vacuum valve. Pre-planning, training and communication between ship and shore reduce these risks.

Over the years, Gard has seen some extensive structural damage resulting from over pressurization of liquid cargo tanks during shore pipeline clearing either by line blowing or pigging. Line blowing is clearing shore pipeline using compressed air or nitrogen.  Pigging is a form of line clearing in which an object, most often in the form of a rubber sphere or cylinder known as a “pig”, is pushed through the shore pipeline by a liquid or by compressed gas. A pig may be used to clear the pipeline completely, in which case it will usually be propelled by compressed gas, or to follow a previous grade of cargo to ensure that the pipeline remains as free of product as possible, in which case it is likely to be propelled by the next grade. Such operation is necessary to prevent mixing of grades or products in the shore pipeline to avoid cargo contamination and to ensure the line is ready for the next operation.

The procedure for clearing shore pipelines between the shore tank and the ship manifold will depend on the facilities available at each terminal and the type of cargo loaded. Due to the volume being displaced into the cargo tank during pipeline clearing, it is extremely important that this flow is controlled at the manifold with the manifold valve. Ship and terminal procedures will address all relevant aspects of the cargo and line clearing operations, but it has become evident that enforcement of good communication between the involved parties prior to and during the entire operation is a key factor in preventing incidents.

All cargo operations must be carefully planned and documented well in advance of their execution. The details of the plans must be discussed with all personnel, both on the ship and at the terminal. How responsibility is to be shared between the ship and terminal must be agreed.

The Master should ensure that ship’s personnel assigned to duties during the cargo operations are properly trained and fully aware of the challenges and hazards associated with pipeline clearing operations for the relevant cargoes.

A pre-cargo operation meeting between personnel responsible for the operation from ship and terminal should confirm all critical interface parameters, including those important in the pipeline clearing operation.

The hazards and parameters to be discussed in pre-cargo operation meeting include:

At the commencement of loading, and at each change of watch or shift, the Responsible Officer and the Terminal Representative should each confirm that the communications system for the control of loading is understood by the personnel assigned to duties during the cargo operation. During the operation, there should be continuous and direct communication between the terminal and the ship until the operation has been completed and all valves have been closed.

In order to minimize risk of over pressurization:

Awareness of the hazards that arise in clearing of shore pipelines and training for the operation, careful pre-planning with terminal counterparts, and good communication between the ship and terminal personnel reduce the risk of over pressurization and overfill when completing cargo operations by clearing the shore pipeline.