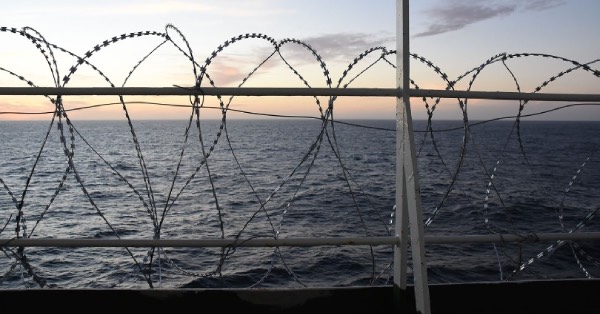 While reported incidents of piracy and armed robbery are down to their lowest level in decades, violence against crew remains high in many areas of the world. A Gard correspondent was recently called to attend onboard a ship where crew members had been severely beaten by robbers during a stay at the Conakry Anchorage, Guinea

According to one of Gard’s African correspondent, TCI Africa/ Eltvedt & O’Sullivan, robbery incidents occurring at the Conakry anchorage appear to be increasing, not only in numbers but also in the level of violence asserted against seafarers. Not long ago, the correspondent was called to attend onboard a ship where crew members had been severely beaten by robbers, who also looted cash, mobile phones and other electric items. Fortunately, there was no loss of life, however, the incident serves as a stark reminder of how modern piracy continue to be a threat to the lives and livelihoods of seafarers. The correspondent further advises that ships destined for Guinea should exercise vigilance and, where possible, avoid long stays at the Conakry Anchorage.

We are grateful to TCI Africa / Eltvedt & O’Sullivan for providing the above information.

Decrease in Gulf of Guinea – but no time for complacency

However, recent incidents in the region remind the maritime industry that the piracy risk in the Gulf of Guinea region should never be underestimated. On 25 October 2021, a container ship was boarded by an unknown number of pirates while underway approximately 149NM SW of Brass, Nigeria. The ship’s crew managed to retreat into the citadel and remained safe, but the pirates escaped with various items of ship property. Later that same day, an offshore supply vessel (OSV) was attacked further east in the same area. At the time of writing, information regarding the safety of the crew onboard the OSV remains unclear. Data also shows that the number of attacks in the region is generally lower during the rainy season, which lasts from April to September. As an example, 18 of the 35 incidents recorded by the IMB PRC in Nigeria in 2020 occurred in the last quarter of the year. Hence, with weather improving, attacks may be more likely to take place, also at significant distances from the coastline.

While the reduction of reported incidents is welcome, the IMB PRC warns that seafarers must remain vigilant as violence against crew remains high in many areas of the world. The agency reports that 51 crew were kidnapped, eight taken hostage, five threatened, three injured, two assaulted and one killed during the first nine months of 2021. The African subcontinent accounted for more than 50% of these so called “Severity Level I” incidents. This is the highest severity level describing incidents which have had a direct impact on crew, such as those where crew have been taken hostage, assaulted, killed, kidnapped or threatened.

It is also worth noting that more than 50% of all incidents globally in the first nine months of 2021 occurred while the ship was anchored, and that weapons, such as guns and knives, are frequently used by the pirates/robbers. The Callao Anchorage in Peru has been regarded as a robbery hotspot for many years and this year seems to be no different. Recurring incidents of armed robbery against ships in Manila Bay in the Philippines have also been identified as a security challenge. In the Gulf of Guinea region, both Conakry/Guinea and Luanda/Angola featured in the IMB PRC’s list of ports/anchorages with the most incidents between January – September 2021.

Prior to entering any piracy prone area, it is important to review the ship security plan in light of latest information received, conduct a voyage specific risk assessment, brief and train the crew and prepare and test the ship’s emergency communication plans. Relevant preventive measures must be adopted, following available industry guidance and best management practices (BMP), such as the BMP West Africa, BMP5, and the Global Counter Piracy Guidance for Companies, Masters and Seafarers.

As ships may be particularly vulnerable when at anchor, ship masters and crew should exercise extra vigilance when staying at high-risk ports/anchorages. Remember that a proper lookout is considered one of the most effective methods of ship protection. It can help identify a suspicious approach or attack at an early stage, allowing defences to be deployed.