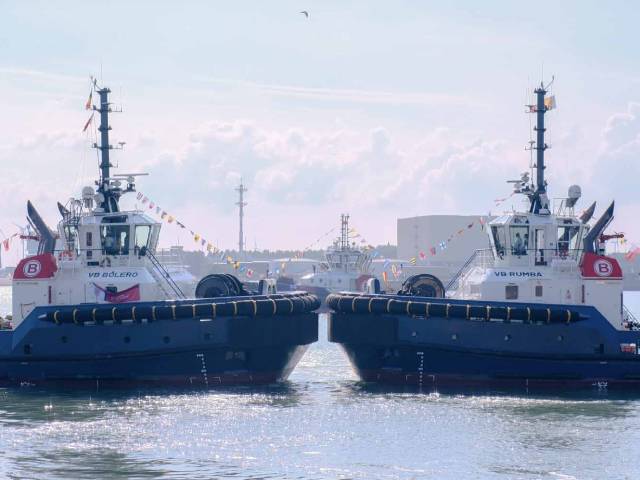 On 16th September 2021, the naming ceremony of four newly-built tugs “VB BOLERO, VB RUMBA, VB FLANDES and VB SAMBA” has been held in the Port of Zeebrugge.

In 2021, Boluda Towage has taken four newly-built Damen tugs, the “VB BOLERO, VB RUMBA, VB FLANDES and VB SAMBA”, into service for the extended concession for towage services in the Port of Zeebrugge.

In addition to efficient, smooth and safe shipping, sustainability is also an essential part of the concession agreement between Port Authority Zeebrugge and Boluda Towage. The newly-built tugs are complying with IMO Tier-III emissions requirements and are certified with the highest fire-fighting standards. The emissions of the tugboats, e.g. nitrogen oxides, will be reduced with 80%. Shore power also will become the norm for moored tugboats, so that these can switch off their engines when inactive and during the rest-period of the crew.

The naming ceremony for the tug quartet was performed by the Lady Sponsors:

The naming ceremony was attended, among others, by the president of Boluda Corporación Marítima and Boluda Towage – Vicente Boluda Fos, the Minister of Justice and the North Sea – Vincent Van Quickenborne, the Governor of West Flanders – Carl Decaluwé, Bruges Mayor – Dirk De Fauw, customers, suppliers, stakeholders, crew and staff of Boluda Towage.

President Boluda Corporación Marítima, Mr. Vicente Boluda Fos: “Boluda Towage’s significant investment in the construction of these four new tugs is just one example of the company’s focus on offering the best service and maximum safety in the ports of Northern Europe”.

Boluda Towage Europe’s CEO, Mr. Geert Vandecappelle: “As a token of our appreciation for the many years of cooperation between Port Authority Zeebrugge/MBZ, Port of Antwerp and Boluda Towage, we invited the aforementioned Lady Sponsors to perform the naming ceremony. We are grateful for their commitment”.

Deputy Prime Minister and Minister of the North Sea, Mr. Vincent Van Quickenborne: “Our seaports are the logistical heart of Europe. Everyone knows that tugboats are very important workhorses of the ports. But, we must not forget the need for urgent and ambitious emission reductions within the maritime transport sector in the fight against global warming. As a government, we ensure ambitious regulations, and companies such as Boluda Towage are already making a difference”.

Bruges Mayor, Mr. Dirk De fauw: ”As the president of the port administration, I am delighted to ‘embark’ upon this collaboration with Boluda Towage again. It’s the continuation of a loyal, professional and sustainable relationship that will allow both MBZ and Boluda Towage to further enhance the shipping industry in Zeebrugge”.

Vice President Boluda Towage, Mr. Vicente Boluda Ceballos: “The four new tugs, which were introduced in Zeebrugge, are in line with the objectives of Boluda Towage and the Port of Zeebrugge to have the latest technology, the highest efficiency and emissions reduction.”