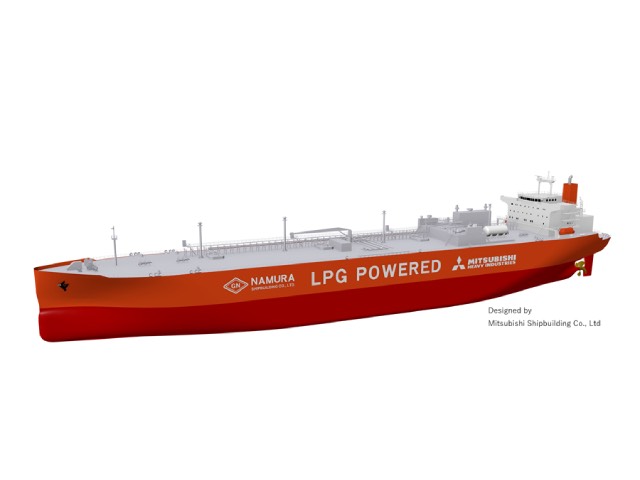 Mitsubishi Shipbuilding has developed an all-new type of VLGC applying its knowledge and expertise accumulated through the construction and delivery of more than 80 VLGCs and midsized LPG/ammonia carriers. Operating performance has been improved by increasing the holding capacity of the cargo tank from the earlier 83,000m3 to 87,000m3, while engineering enhancements have resulted in improved fuel efficiency. In addition, Mitsubishi Shipbuilding has applied its technologies in gas handling to develop a new system capable of using LPG in the cargo hold as fuel to propel the ship. This ability to secure LPG fuel from the cargo tank has a benefit that adds flexibility for the LPG terminal compatibility. Furthermore, the newly developed VLGC features largest-scale at present among all ships capable of carrying ammonia, a point of advantage amid anticipated expansion of demand for large-scale ammonia transportation, which emits zero CO2during combustion.

Going forward, Mitsubishi Shipbuilding will provide shipbuilding technologies in response to all customer needs as a total engineering firm handling new ship constructions as well as ships already in service, making no distinctions between vessels constructed in-house and those made by other shipbuilders. In these ways the Company will make ongoing contributions to the development of maritime logistics and also help reduce environmental impact, a critical issue of global scale.