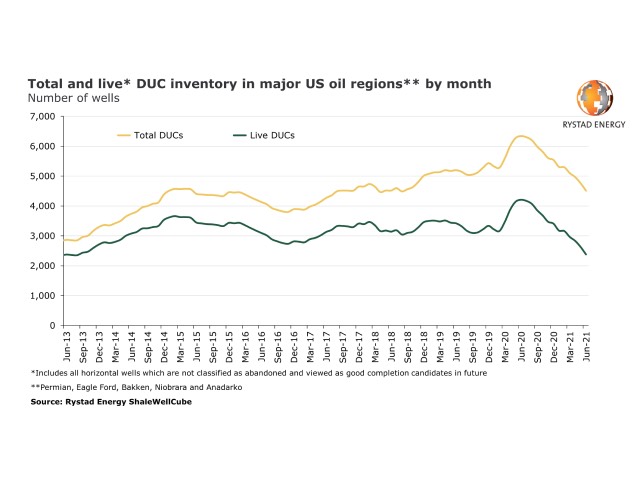 US tight oil operators have for several months been depleting their inventory of drilled but uncompleted wells (DUCs) and, amid a slower drilling response, the number of ‘live’ DUCs in the country’s major oil regions slumped to 2,381 wells in June 2021, the lowest level since 2013, a Rystad Energy analysis reveals.

The total number of horizontal DUCs in the Permian, Eagle Ford, Bakken, Niobrara and Anadarko regions combined fell to 4,510 wells by the end of June. That implies a reduction of 1,800 wells from the peak of 6,340 in June 2020 and an average depletion of 150 wells per month over the past 12 months. The last time the size of the inventory was at this level was in the second half of 2018.

However, the total includes so-called ‘dead’ DUCs – or wells that were drilled more than 24 months earlier and remain uncompleted. Empirical evidence shows that more than 95% of wells drilled are typically completed within the first two years, and hence the probability of those more than two years old getting completed now are low. Therefore, including ‘dead’ DUCs to gauge future activity or forecast production is often more speculative.

“Looking at the number of remaining ‘live’ DUCs, a significant oil supply response from the US onshore industry to the $70-$75 per barrel WTI market is practically impossible before the first half of 2022. Any further increases in fracking, and subsequently well completions, will now require producers to first expand drilling by adding more rigs,” says Artem Abramov, head of shale research at Rystad Energy

Live DUCs have declined across all major oil basins, with the Anadarko region the only exception. In the Permian, only about 1,550 horizontal live DUCs remain as of end of June – a decline of 37% from the 2,470 wells in the same month last year. As rig activity in the Permian has remained more robust since the start of the Covid-19-induced downturn, the total live DUC inventory count has not returned to the 2013 level, as is the case for all other basins combined.

The Permian live DUC inventory level currently is comparable to the second and third quarters of 2019. The picture across other major oil basins is more dramatic. South Texas’ Eagle Ford and the Bakken only have 300 live DUCs each left. Such a level in these two pioneering liquids plays has not been recorded since 2010. The inventory of live DUCs is down to 310 in the Niobrara region – the lowest since 2013.

A breakdown of the total tight oil DUC inventory by spud vintage, or the year the wells were spud, clearly shows that 2019-2020 vintages had a significant weightage on fracking activity as of June. While new wells are being drilled, the new inventory build-up in 2021 is insufficient to offset the depletion coming from pre-2021 vintages.

In previous months, we repeatedly highlighted vintages from the fourth quarter of 2019 and the first three months of 2020 as key contributors of the unusually high DUC inventory build-up in the beginning of the Covid-19-induced downturn. By June 2021, 84% of those wells were completed. While it is still somewhat lower the 14-month depletion rate of 92-93% recorded for 4Q16-1Q17 and 4Q17-1Q18 vintages, it is comparable to the 87% posted for the 4Q18-1Q19 vintage between April 2019 and June 2020. Hence, this part of the DUC inventory anomaly has been largely eliminated by now.

While some degree of abnormality is still present, the industry is not that far off from a complete normalization of the DUC inventory level. The number of horizontal live DUCs per rig has already declined to 6.4 wells in the Permian and 9.2 in other major oil regions as of June 2021. Prior to the Covid-19 downturn, the level was at 3.9 for the Permian and 6.4 across other oil regions. Given the current activity and depletion trend, the industry will likely see a complete normalization by the end of September in the Permian, and by September-October across other oil regions.