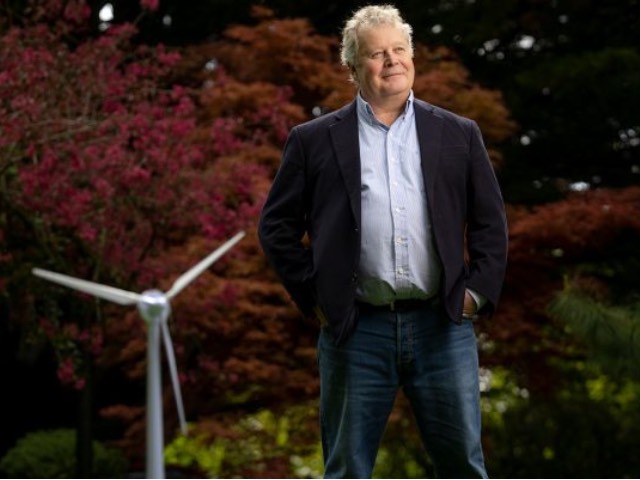 The Buttevant-based company has earned a global reputation as a developer of wind, solar and tidal renewable energy projects

From its headquarters at Buttevant in north Cork, DP Energy operates sustainable energy projects in Ireland and overseas in Scotland, Canada and Australia.

DP Energy was founded in 1994 by Maureen De Pietro, a trailblazer in the field of renewable energy.

Maureen’s son Simon joined her after turning down the opportunity to join Solar Turbines, a US company based in San Diego, California, as a gas turbine engineer.

In the years since, DP Energy has earned a global reputation as a developer of renewable energy projects spanning onshore wind, solar and tidal.

Simon De Pietro is the company’s chief executive and also co-president of Ocean Energy Europe (OEE), a position he has held for a number of years.

Sustainable development is a core principle for DP Energy, whose team is drawn from a broad range of specialisms, including engineering, marine science, project management and technical support.

The company’s core projects currently centre on a joint venture the Cork company has entered into with Iberdrola, the Spanish energy giant.

Together, they are developing three offshore wind projects off the Irish coast. All three pipeline projects will utilise floating wind technology.

The projects include Inis Ealga in Cork and Clarus in Clare. The third project, Shelmalere, will be located off the east coast and will have fixed foundations.

Iberdrola has acquired a three-gigawatt pipeline of offshore wind and a majority stake in DP Energy’s offshore business.

The partnership with Iberdrola came about as a result of work DP Energy carried out on onshore wind projects in Scottish Power territory – Scottish Power is a subsidiary of Iberdrola.

Currently under construction, Port Augusta will use a hybrid mix of both wind and solar energy.

De Pietro was, he said, “more than happy” with his company’s collaboration with Iberdrola, because a fundamental challenge in the delivery of offshore wind energy was often the sheer cost of construction.

“DP Energy had decided many years ago that we wanted to develop Irish offshore wind, but we recognised that we needed a partner,” De Pietro said.

“It was important to us that this partner shared a similar commitment to climate change and an ethical approach to development. Iberdrola fitted that bill.

“It is a global energy leader and one of the world’s largest renewable energy producers. It also has substantial experience in offshore wind development.”

A ‘Lightbulb Moment’ in De Pietro’s own renewable energy journey came about when he watched The Blue Planet, the 1990 Imax film, which featured footage of Earth shot from space shuttles orbiting the planet.

What struck De Pietro most was how the film depicted the fragility of our planet’s ecology and climate, and evidence of the damage caused by deforestation, pollution and unchecked carbon emissions.

The realisation that wind energy could help to reduce global carbon emissions led Maureen to her own epiphany. She decided to leave her job as a partner at a legal practice in Bristol to forge a new career in wind energy with Simon by her side.

Over the course of his own 30-year career in renewable energy development, Simon De Pietro has met his fair share of climate-change sceptics and deniers. He is, however, open to dialogue.

“We are happy to speak to anyone. At the end of the day, everyone is entitled to an opinion. If that opinion is that they simply do not like the appearance of wind turbines, even after considering the benefits, then that’s fair enough,” he said.

“The biggest challenge is ensuring that accurate information is out there for people to consider, because disinformation is prevalent.”

“Sustainable development is development that does not compromise the ability of future generations to meet their own needs,” he said.

“We conducted sustainable developments in a manner that has the least possible impact on other species and the oceans, land and air that we all share together.”

DP Energy has an exciting future ahead. “Our plans for the Irish offshore market, in particular, are very strong for the next number of years,” De Pietro said.

“Each one of the three DP Energy/Iberdrola offshore wind projects has the potential to generate one gigawatt of renewable energy, enough to power more than 700,000 homes.

“Our team is currently working hard to design, consent and deliver these schemes to contribute to Ireland’s climate action plan of 70 per cent renewable energy by the 2030 goal.”