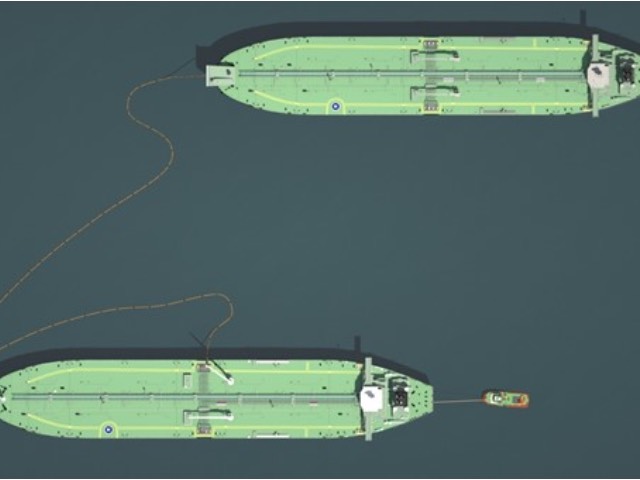 A revolutionary new ship-to-ship cargo transfer system has been developed and patented by SafeSTS for the Dynamic Positioning (DP) shuttle tankers sector. The innovation provides greatly increased flexibility and efficiency for the export of oil from offshore fields in the world’s most challenging offshore environments.

Traditionally, these shuttle tankers are only used in DP mode to load from floating production, storage and offloading platforms, with subsequent transfer to export tankers taking place in side-by-side ship-to-ship transfer operations.

However, the SafeSTS Transfer Via buoy Terminal (TVB) is designed to enable export tankers to load or discharge at a single point mooring (SPM) type terminal, with the DP shuttle tankers discharging in DP mode whilst keeping at a pre-determined distance of circa 150 metres from the export tanker.

In the event of squalls or other environmental events, system stability is provided by the export tanker hold-back tug, whilst the DP shuttle tanker independently holds station in relation to the export tanker.

The TVB Terminal has no subsea structure apart from anchors and chains, and with the dual-carcass floating hoses containing the oil always visible on the surface, regular maintenance and inspection is easily conducted without the use of specialist underwater personnel and equipment.

The TVB Terminal can be located close to the production fields to provide both exceptional operational availability and increased commercial and environmental capability. With its capacity to handle 20 operations per month, VLCC tankers will only need to moor once to the TVB Terminal, to then be loaded by multiple consecutive DP shuttle tankers with various sized cargo volumes.

Recognising that not all DP shuttle tankers can discharge through the Bow Loading System (BLS), SafeSTS, along with Gall Thomson, has co-developed the PTX Release. This is an emergency release system that can be integrated into a vessel’s Emergency Shutdown System (ESD), facilitating discharge or load through a vessel’s standard manifold in DP mode.

“When compared to all other transhipment options, this concept delivers safety, commercial, and efficiency benefits as well as a potentially significant reduction in greenhouse gas emissions, thereby contributing to climate change targets under the Paris Climate Agreement.

Whilst the system is primarily aimed at existing markets, the concept has the capability to create new opportunities in areas where DP shuttle vessels have not previously operated, and where environmental conditions restrict traditional offshore ship-to-ship transfers.”

Based in Diss, Norfolk, SafeSTS is an international lightering company which manages ship-to-ship transfers from multiple locations around the world. All such operations are undertaken in line with Marpol Chapter 8 and the latest ICS/OCIMF guidelines.