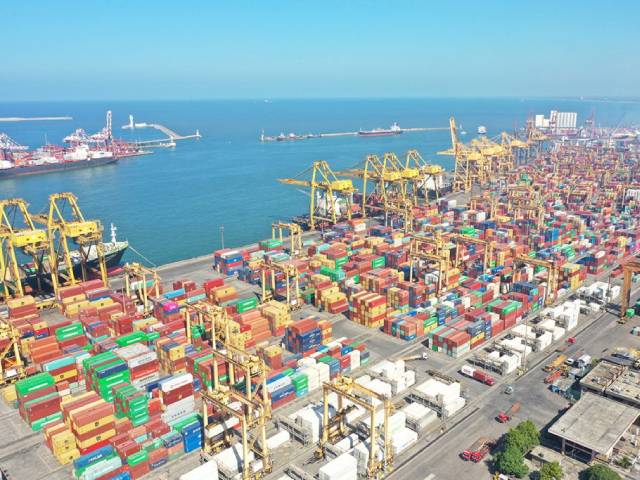 The Sri Lanka Ports Authority (SLPA) took successful measures to quell a chemical leak from a container on board MV Seaspan Lahore at the Port of Colombo on 29.07.2021, according to SLPA’s release.

This vessel which was sailing from the Indian Port of Mundra to Colombo carrying containers detected a leak from a container carrying Nitric Acid in drums. This container was to be discharged at an African port after Colombo.

The detection was done six (06) hours after the vessel’s departure from Mundra. The Captain of the ship belonging to M/S Hapag-Lloyd immediately notified that Local agents M/S Hapag-Lloyd Lanka Pvt ltd., and the agents notified the Habour Master of SLPA and the container terminal – SAGT. Thereafter, a thorough study was made of the storage plan and the commodities in the adjacent containers on board the ship by the Chairman and the Habour Master of SLPA. Then it was decided to berth the vessel and discharge and rework the good order barrels of Nitric Acid into a fresh container for onward carriage. There were 650 drums of Nitric Acid in the container.

Capt. Nihal Keppetipola – the Chairman of SLPA commenting said, had the reworking was delayed by one more day, there certainly would have been a chance for a fire on board. He said the bottom of the container was already partially perished. He said SLPA was capable with the experienced officers and geared to handle such situations and had successfully carried out on several occasions in the past.

The reworking was completed successfully with the port fire brigade standing by and with the assistance and participation of SLPA officials and crew, SAGT officials, officials of Hapag-Lloyd Lanka Pvt Ltd., and the personnel from HAMKA Shipping specialized in the operation.