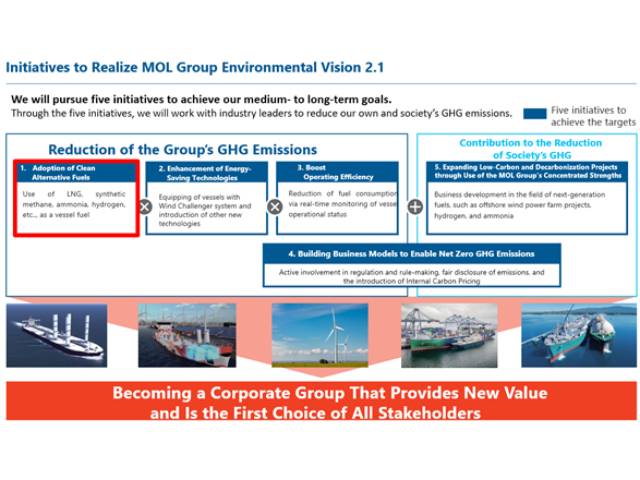 MOL announced that it reached an agreement with Shin Kurushima Dockyard Co., Ltd. and Nihon Shipyard Co., Ltd. to build four 7,000-unit capacity car carriers using environment-friendly liquefied natural gas (LNG) as their main fuel. Compared to conventional marine fuel oil, LNG is expected to reduce emissions of carbon dioxide (CO2) which is a greenhouse gas (GHG), by about 25-30%, sulfur oxide (SOx) by 100%, and nitrogen oxide (NOx) by about 85%. The vessels are slated for delivery in succession starting in 2024.

In June 2021, MOL established the “MOL Group Environmental Vision 2.1” as a guide to achieving net zero GHG emissions by 2050.
It plans to launch about 90 LNG-fueled vessels by 2030, under its strategy calling for “Adoption of Clean Alternative Fuels” (Fig.1) to achieve that target.
In addition to the LNG-fueled vessel projects (Note 1) that the MOL Group has been working on, we will promote the use of LNG-fuel for car carriers, starting with this decision.

MOL is accelerating its preparations for the launch of environment-friendly vessels using not only LNG fuel but also biofuels (Note 2), which are reaching the practical application stage, while continuing to research the use of ammonia and other next-generation fuels.
It will make further efforts with the aim of becoming the company of choice for various stakeholders, by delivering a new value—zero-emission transport of cars.