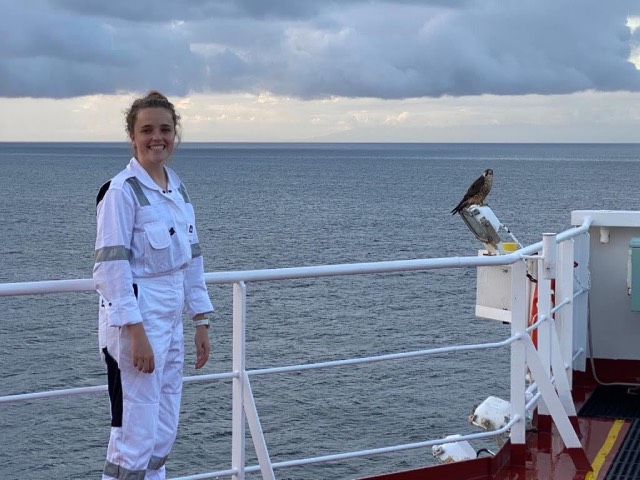 A CAREER AT SEA MEANS LIVING ALONGSIDE MARINE WILDLIFE

One of the many privileges of working on the sea is the opportunity to experience sea life up close and personal. The Hispania Spirit had an additional winged passenger, a young peregrine falcon, whom the crew baptized as “Palomino.” Palomino joined the voyage from Port of Bilbao in Northern Spain to Point Fortin in Trinidad and Tobago.

With a new friend on board, the crew members observed Palomino daily and with a collective effort to research, they learned a lot about their new winged passenger. In the beginning, Palomino fed on small birds that ventured on board, but soon found that this was not sufficient. Since he was young, Palomino dared not fly from the “nest.” To survive, Palomino improvised by learning to fish.

Palomino was last seen by the crew on the Trinidad dock. While the crew was sad to see Palomino go, the crew was thankful to Palomino for making their journey an entertaining one!

While it is typical that seafarers spend months at a time living and working away from their family and friends, that does not mean it is an easy task. As Deva learned during her cadetship, caring for mental health while at sea is a serious commitment on board Teekay vessels and it can make a big difference.

During Deva’s cadetship, she spent time getting to know her crewmates onboard Hispania Spirit and partaking in various onboard activities. Whether casually socializing by watching television or movies, playing cards, or PlayStation competitions, or through organized fun like karaoke afternoons and games of Trivial Pursuit.

To engage in physical activity, the crew organized basketball matches and many hit the gym every week. One Chief Officer Jr. onboard even ran a half marathon on the treadmill! With an array of positive community activities to keep the spirits high onboard, the voyage ran smoothly. As Deva recounts, “staying on board away from our homes and families is sometimes difficult, but with a positive mental health, the contract will be better and pass faster.”

“Staying on board away from our homes and families is sometimes difficult, but with a positive mental health, the contract will be better and pass faster.”

PUTTING SAFETY FIRST MEANS BEING PREPARED FOR ANYTHING

One of Deva’s last trips with the Hispania Spirit was from Rio de Janeiro, Brazil, to St. John’s, Canada. With the drastic change in temperature from 35 °C in Rio to an average of -10 °C in St. John’s, the Hispania Spirit and its crew had to ensure all the necessary checks and appropriate PPE were prepared for the different temperature zones. Deva reminisced on the importance of being prepared for the journey by ensuring that safety and integrity would always be at the forefront of the work they do. She emphasized this by saying “no calm sea made a sailor an expert.”

“Sailors are people who must be prepared for countless situations, sometimes totally opposite. This is highly valued and that is why we refer to the well-known phrase ‘no calm sea made a sailor an expert’.”

Thank you Deva for sharing stories and learnings from your cadetship! 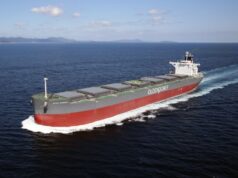