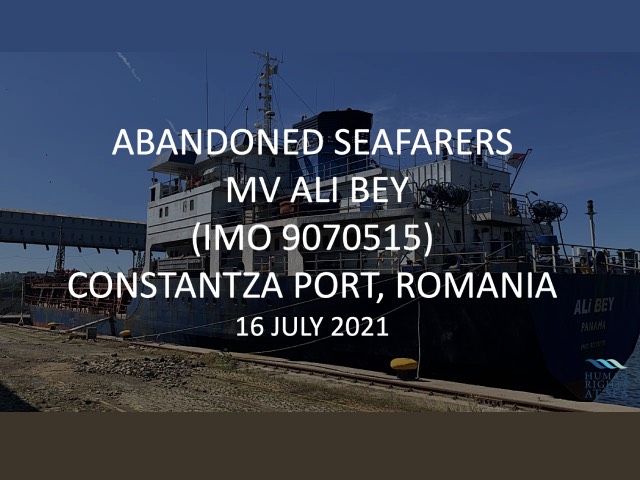 The Master of the MV Ali Bey (IMO 9070515) has provided a voluntary video testimony to Human Rights at Sea outlining the privations that he and the remaining three Syrian crew members continue to suffer since their vessel was arrested and abandoned by its owner in Constanza Port, Romania, in November 2020 with earned wages owed prior to that date stated as totalling USD $175,000.

Syrian national, Captain Abdullah Dahha and his Syrian crew have been tied up alongside the port without pay and subject to apparent threats from the owner to have them sent to prison.

In addition, they have been left without money, proper food, periodic power supplies and a lack of potable water. They have therefore been reliant on the generosity and charity of local welfare persons and entities.

Supported by the local ITF Inspector, to whom HRAS has spoken, the ITF have been able to variously have ship’s power re-connected with Port State engagement, have raised the case in the local court, and are working to obtain a 100% wage settlement.

The owner is further reported to have threatened the Master, crew, and local ITF inspector with legal action to prevent payment of their wages under their contracted terms, though it is reported to HRAS that he has disappeared with no response to phone calls, and only letters being variously sent to crew, the court, and the inspector.

The remaining crew onboard, and those who have already departed and signed-off with less than 100% wages owed, did manage to secure four months wages from the American P&I club under the terms of the MLC 2006.

The case is currently reported on the ILO Abandonment database under Case No. 00940 – with the latest update stating:

“Govt. of Panama (14 July 2021)
From Panama Maritime Authority
According to email dated Jan 12, 2021, the crews on board were going to be repatriated but their payment will remain hold.
June 4 2021, We received confirmation from the ITF inspector, Mohamed Arrachedi that the wages owned had been paid and that they were awaiting the repatriation of the crew.”

ITF has disputed the statement of the Panamanian authorities and confirmed to HRAS that Mr. Arrachedi did not inform Panama that the “wages owned (sic) has been paid”. The ITF have written today to the IMO seeking clarification and correction of the facts.

HRAS has reached out to the Panama flag administration and the P&I club for comment, but none has been received at the time of publishing.

Watch the Testimony – Subtitles are available

This case reporting is subject to update and continuous review.

All images used are with explicit permission of the Master. Faces have been obscured to protect the crew.