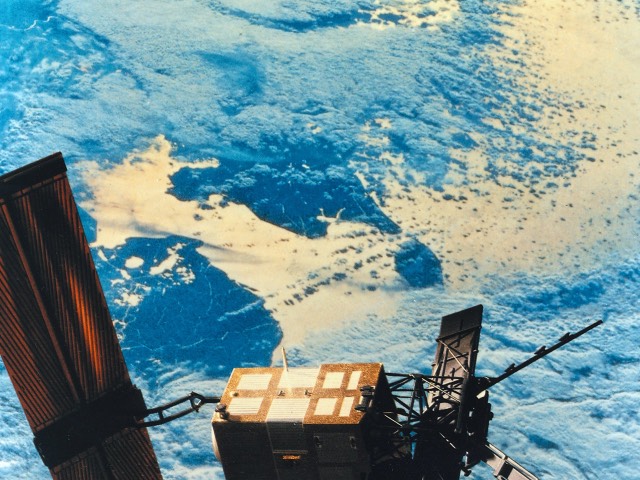 Weighing 2.4 tonnes, ERS-1 was developed and built under the leadership of what is now Airbus Defence and Space by an industrial consortium of more than 50 companies in 14 countries. It was the most advanced and complex satellite of its time and the first European satellite to feature a radar system and microwave instrumentation for measurements and imaging over sea and land. This made it possible for the first time to observe areas of the Earth that often elude the view of satellites due to frequent cloud or fog.

At the heart of the ERS-1, which orbited the Earth at an altitude of 785 km on a polar orbit, was a radar that operated at a wavelength of 5.7 cm (corresponding to a frequency of 5.3 GHz in the so-called C-band). During each orbit, the beam scanned a 4000 km-long and 100 km-wide strip on the Earth’s surface. From this, images with a resolution of 30 metres were created.

After nine years of outstanding service, more than three times its planned lifetime, the ERS-1 mission ended on 10 March 2000. Since its launch in July 1991, it completed 45,000 orbits and transmitted 1.5 million radar images to Earth. Today, ERS-1 is also considered a pioneer of environmental research from space.

The launch of ERS-2 four years later (April 1995) opened up even more possibilities. For one thing, this satellite also had the ozone measuring instrument GOME (Global Ozone Monitoring Experiment). It regularly monitored the ozone content in the stratosphere and in particular the changes in the ozone hole over the South Pole.

Secondly, both radar satellites were able to be used simultaneously for a few years. During this so-called tandem mission of ERS-1 and -2, the new technique of radar interferometry was tested. Here, the same area was imaged twice or several times at different times with the two satellites. The superimposition of the images then produced an interferogram. Interferograms are used to create digital terrain models with a height resolution of a few metres. Above all, however, it is possible to register changes that have occurred on the surface between the images with an accuracy in the millimetre range.

Volker Liebig, Director of Earth Observation at the European Space Agency (ESA) from 2004 to 2016, assesses the first remote sensing programme in retrospect: “ERS-1 was the initial spark for a unique development in Europe. Earth observation is probably the only space sector in which Europe is a world leader and in which the states have also invested comparably to the USA. This was of course driven by Europe’s strong commitment to environmental protection, especially climate change. Without the success of the ERS programme, I don’t think that would have happened.”

Building on the ERS experience, a number of national satellite programmes and other European projects developed. The second-generation MetOp satellites (MetOp-SG) are currently being built under the leadership of Airbus. The “Earth Explorers” are satellites with primarily scientific missions. Airbus Defence and Space is responsible, for example, for the ice research satellite CryoSat (launched in 2010) and the three-satellite mission Swarm (launched in 2013) to study the Earth’s magnetic field and Aeolus (launched in 2018) to create global wind profiles. With EarthCARE and Biomass, two further “Earth Explorers” are in development by Airbus for ESA.

With the launch of Sentinel-1, which also carries a C-band radar from Airbus, the European Copernicus programme (EU/ESA) for environment and security received its first “own” satellite in April 2014. Copernicus is designed to provide vital information in six key areas: land monitoring, marine monitoring, disaster and crisis management, atmospheric monitoring, climate change monitoring and security. The comprehensive and uniform data on a global scale that is necessary for global environmental monitoring is inconceivable without satellite systems.

“With Copernicus, Europe has finally taken the lead in Earth observation,” Liebig continues. “Today, the whole world congratulates us on this system, which provides such important environmental data about our Earth. Copernicus was the crucial step from scientifically exploring important processes in our environment, as we do with ESA’s Explorer missions, to operationally observing. Scientists analysing the climate need data showing processes of more than 30 years. This in itself shows us why we needed Copernicus so badly, and it also shows us why it makes sense to celebrate 30 years of ERS-1. Since ERS-1, we now have data series, for example, for polar ice cover, sea level rise, ocean surface temperature trends and many other climate variables.”

At the heart of the space component are specially developed space missions for Copernicus, the “Sentinels”. Airbus Defence and Space is responsible for the industrial management of seven of the 13 Sentinel missions.

Today, with more than 60 years of space experience, Airbus Defence and Space has unique expertise and extensive know-how in the design, manufacture, test and operation of Earth observation satellites, instruments and components and associated services, which have made it one of the leading space companies in the world and led it to a leading position in the export of remote sensing satellites.