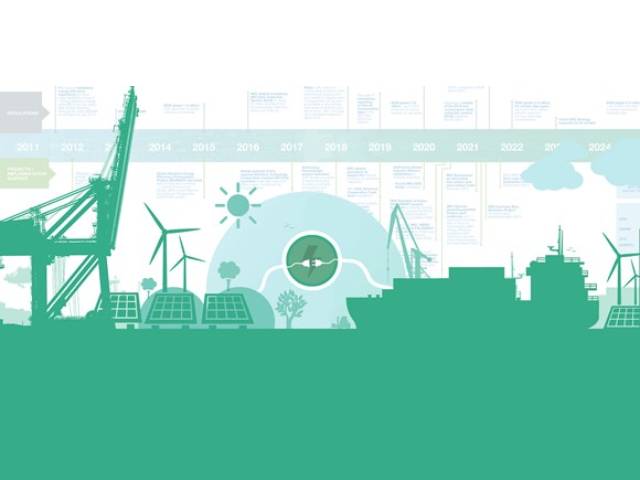 The International Maritime Organization (IMO) is marking a decade of action on cutting greenhouse gas emissions from shipping, since the first set of international mandatory measures to improve ships’ energy efficiency was adopted on 15 July 2011, as part of the International Convention for the Prevention of Pollution from Ships (MARPOL).

To support the implementation of the measures and encourage innovation, IMO has been implementing a comprehensive capacity building and technical assistance programme, including a range of global projects. These include the GEF-UNP-IMO GloMEEP Project (now concluded), the European Union funded global network of maritime technology cooperation centres (GMN project), the IMO-Norway GreenVoyage2050 project and the IMO-Republic of Korea GHG SMART Project.

“In July 2011, the first set of mandatory measures to improve the energy efficiency of new build ships was adopted, fundamentally changing the baseline for the performance of the incoming global fleet in terms of emission reduction. The pace of regulatory work to address GHG emissions from shipping has continued within the framework of the IMO Initial Strategy for reducing GHG emissions from shipping, and most recently with the adoption of further, key short-term measures aimed at cutting the carbon intensity of all ships – new build and existing ships – by at least 40% by 2030, compared to the 2008 baseline, in line with the initial strategy ambitions.”

“The package of mandatory measures combined with implementation support sets shipping on a pathway to decarbonization. There is more work to do, but we have solid foundations, which is contributing to the global fight against climate change” Mr. Lim said.

Regulations to cut emissions from ships

The issue of controlling air pollution from ships – in particular, noxious gases from ships’ exhausts was discussed at IMO as early as the 1970s, but drew more attention in 1988 when the Marine Environment Protection Committee (MEPC) agreed to include the issue of air pollution in its work programme. In 1991, IMO adopted Assembly Resolution A.719(17) on Prevention of Air Pollution from Ships. The Resolution called on the MEPC to prepare a new draft Annex to MARPOL on prevention of air pollution.

The Kyoto Protocol, which was adopted in December 1997, was a major step in the fight against climate change. It operationalized the United Nations Framework Convention on Climate Change by committing industrialized countries and economies in transition to limit and reduce greenhouse gases (GHG) emissions in accordance with agreed individual targets.

In response, in the same year at the 1997 MARPOL Conference, IMO adopted MARPOL Annex VI on regulations for the prevention of air pollution from ships. This resolution invited the MEPC to consider what CO2 reduction strategies might be feasible in light of the relationship between CO2 and other atmospheric and marine pollutants. The resolution also invited IMO, in cooperation with the UNFCCC, to undertake a study of CO2 emissions from ships for the purpose of establishing the amount and relative percentage of CO2 emissions from ships as part of the global inventory of CO2 emissions.

The MEPC developed operational and technical measures and IMO agreed to include a new chapter on “energy efficiency” in MARPOL Annex VI.

This represented the first set of mandatory energy efficiency measures for any transport sector.

Since their adoption, further amendments have been adopted to strengthen the EEDI requirements, particularly for certain ship types.

In 2016, IMO adopted the mandatory IMO Data Collection System (DCS) for ships to collect and report fuel oil consumption data from ships over 5,000 gt. The first calendar year data collection was completed in 2019.

The Initial Strategy includes a commitment to assess the impacts on States (particularly Least Developed Countries (LDCs) and Small Island Developing States (SIDS)) of any measure proposed for adoption.

The initial GHG Strategy will be revised by 2023.

In June 2021, IMO adopted key short-term measures aimed at cutting the carbon intensity of all ships by at least 40% by 2030, in line with the ambitions set out in the IMO Initial Strategy.

These measures combine technical and operational approaches to improve the energy efficiency of ships. All ships will have to calculate their Energy Efficiency Existing Ship Index (EEXI) and ships over 5,000 gt will establish their annual operational carbon intensity indicator (CII) and CII rating.

In other words, ships will get a rating of their energy efficiency – A, B, C, D, E – where A is the best.

This is the first time IMO has established a formal rating system for ships. This sends a strong signal to the market: Administrations, port authorities and other stakeholders as appropriate, are encouraged to provide incentives to ships rated as A or B. A ship rated D for three consecutive years, or E, is required to submit a corrective action plan, to show how the required index (C or above) would be achieved.

Shipping will need new technologies, new fuels and innovation to meet the GHG targets. There needs to be investment in R&D, infrastructure and trials.

A range of IMO-executed projects are focusing on supporting developing countries to implement the MARPOL Annex VI energy efficiency measures and promote trials and training.