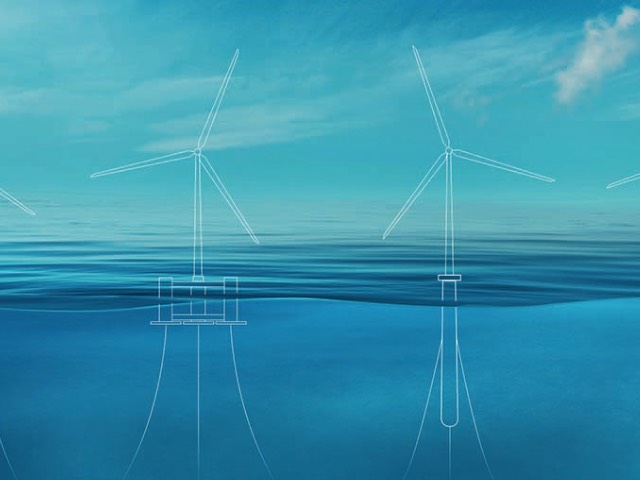 A UK team, led by DNV, has begun work on an innovative collaboration project funded by Innovate UK, and in cooperation with the US National Offshore Wind Research & Development Consortium (NOWRDC).

The research project – running up to March 2023 – aims to reduce the levelized cost of energy (LCoE) in offshore floating wind by investigating the effects of using wake steering (a novel wind farm control (WFC) strategy) on floating wind farms.

An innovation call from the NOWRDC, and partnered with Innovate UK, led to the creation of project teams on both sides of the Atlantic which have begun collaborating on this programme, focusing on specific areas of interest.

The U.S. project team, led by the National Renewable Energy Laboratory (NREL), in partnership with Cornell University and Equinor, will focus on specific regions of North America with potential for offshore wind and will perform optimization studies using wind farm control.

The economic analysis undertaken will give an industry-first comprehensive overview of the effects of the use of wake steering techniques in offshore floating wind farms and whether they can have a positive impact on the project costs.

The consortia will share data and knowledge beneficial for the modelling of site-specific meteorological conditions and complex wind farm wake scenarios due to wind farm control applications, to advance the offshore wind industry as a whole.

A strategy known as wake steering attempts to deflect each turbine’s wake away from downstream turbines, allowing increased overall power production, and longer lifetime of the turbine through reduced fatigue damage.

An example of the scale of the improvements to be made is Hywind Scotland, Equinor’s world-first floating offshore wind farm which achieved a levelized cost of energy of £180/MWh.1 However, the typical LCoE of a fixed offshore wind farm in the UK is well below this at £55/MWh.

There is growing interest in novel wind farm control strategies which can improve the operation of the wind farm as a whole, rather than controlling each wind turbine as if it was operating in isolation from its neighbours.

“The floating foundation used for this study,” explains Graham Foster, Chief Technical Officer at MPS, “utilizes a tensioned mooring that provides a fundamentally more stable platform against which control forces can be applied and resists twist compared to catenary moored platforms. This technology could be more suitable to support wake steering for optimizing the wind farm output.”

Wake steering is considered a strategic technology for turbine manufacturers, wind farm developers and operators. Through the use of this technology, it is estimated that an average-sized wind farm can create a gain in annual energy production above one percent, which is significant for the purpose of asset financing.

DNV will lead the project and continue the development of LongSim, a dynamic wind farm simulator and optimizer for wind farm control applications. Durham University will lead efforts in developing steady-state wake steering models and calibrating them against high-fidelity data. Marine Power Systems will lead on the sizing of its WindSub floating platform to support the reference NREL 15MW horizontal axis turbine and will manage the modelling of the complete system using OrcaFlex software.