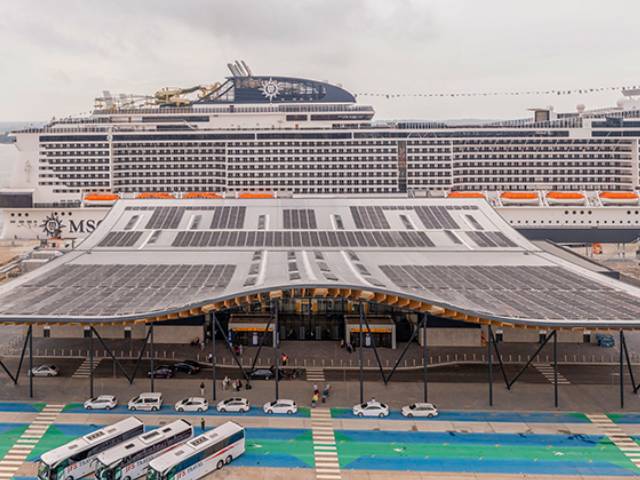 The Port of Southampton’s new world-class cruise facility, Horizon Cruise Terminal, opens its doors to passengers for the first time ahead of its formal opening later in the year.

MSC Cruises’ MSC Virtuosa is the first ship to welcome passengers at the terminal, which is fitted with Shore Power. MSC Virtuosa, with Shore Power connectivity enabled onboard, will be able to ‘plug in’ once the Shore Power is commissioned later this year. Horizon Cruise Terminal is also fitted with more than 2,000 roof-mounted solar panels, which means that on a day-to-day basis it will generate more power than it uses.

Last year, Associated British Ports announced the new £55 million multi-user cruise terminal in partnership with MSC Cruises and Norwegian Cruise Line Holdings Ltd. This strong investment into the future of cruise supports a developing industry and welcomes the next generation of ships in terms of size, capacity and technology.

The Terminal was named Horizon Terminal by a local resident following a competition earlier in the year that welcomed name suggestions from across the world. The name represents a bright new chapter for cruise which is an iconic part of the heritage of the city of Southampton and its future.

“This next-generation-ready terminal strengthens the Port of Southampton’s position as Europe’s leading cruise turn-around port and is a huge vote of confidence in the future of cruise.”

“Today marks another important moment for MSC Cruises in the UK as MSC Virtuosa becomes the first cruise ship to call at the new Horizon Cruise Terminal in Southampton, further enhancing the cruise experience for our guests. We have a long term commercial partnership with ABP Southampton with a commitment that will see us bring even more guests to the port in the coming years, despite these challenging times, when Southampton will play a key part in our itineraries for international cruises.”

“We congratulate the Port of Southampton on the opening of the new Horizon Cruise Terminal,” said Howard Sherman, Executive Vice President of Destination Services and Onboard Revenue at Norwegian Cruise Line Holdings. “This project marks the continuation of a long-standing partnership between Norwegian Cruise Line Holdings and the Port of Southampton. We look forward to the debut of Seven Seas Splendor, the first ship in our fleet scheduled to visit the new terminal this Autumn.”

The construction of Horizon Cruise Terminal has received support from the Solent LEP and the Government’s Getting Building Programme.