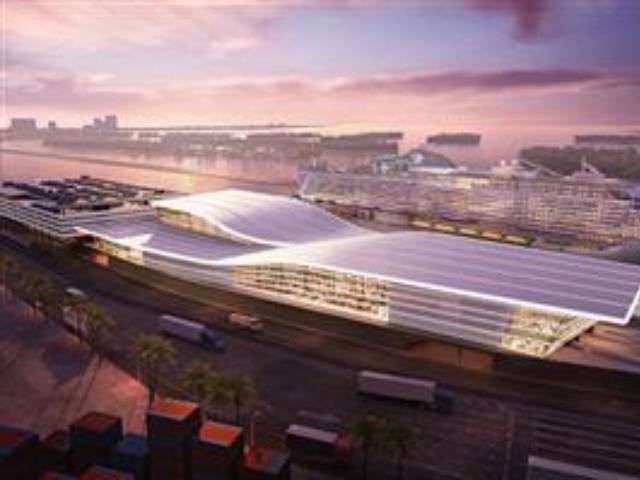 Geneva, Switzerland and Trieste, Italy, 8 July 2021 – Today the Cruise Division of MSC Group and Fincantieri announced the signing of a contract for the construction by Fincantieri Infrastructure Florida of a new mega cruise terminal at PortMiami, the cruise industry’s hub in North America and the Caribbean.

The new terminal reflects an investment of approximately EUR 350 million and will be made up of a multi-level central body to serve as many as three latest generation ships at the same time, with up to 36,000 travellers transiting every day. Designed by the award-winning global architecture firm Arquitectonica, it is due to be completed by December 2023.

The new terminal will be able to accommodate the Company’s largest and most environmentally high-performing cruise ships. These include MSC Cruises’ newest flagship MSC Seashore, which is currently nearing completion at the Fincantieri shipyard in Monfalcone and due to be deployed out of Miami when she enters service later this year, as well as the line’s future LNG-powered World Class ships.

In line with PortMiami’s plans to enable shore power connectivity, the Company’s ships deployed there will be ready to plug in to the local power grid at berth.

Pierfrancesco Vago, Executive Chairman of the Cruise Division of MSC Group, said: “For the past over 35 years MSC Group has been an important partner for the U.S. economy through our growing role as one of the world’s leading container shipping businesses as well as terminal operators for cargo and passengers alike. In this, Miami in particular has always been a key hub for both and the new MSC Terminal at PortMiami consolidates our overall presence in this important maritime centre.

Thanks to the Italian flair that Fincantieri will undoubtedly contribute to this project just like they do to many of our ships, this new state-of-the-art terminal will become a Miami landmark of style as well as comfort for passengers passing through what’s considered the cruise capital of the world. Moreover, it will serve as a platform to support and sustain the expansion of our Cruise Division across the region and in the Caribbean for years to come. It will also allow us to deploy there some of our most modern and environmentally high performing vessels, representing together with our other investments in the U.S. our commitment to the local market, our trade partners and guests.”

Giuseppe Bono, Fincantieri CEO, commented: “Miami is undoubtedly the centre of world cruise tourism, as well as being the ideal hub for the entire Caribbean area, and is therefore the perfect showcase to host a work that will be representative of the best of made in Italy.”

In addition to state-of-the-art facilities for passenger services, the new terminal building will include office areas, a multi-level parking for at least 2,400 vehicles and a new road connection.

As per the terms of the project, the Company will construct two new docks measuring 750 metres in total. The Miami-Dade County will also build a third berth.

The project also foresees the construction of the related seashore infrastructure, including water supply stations and four passenger embarkation decks.