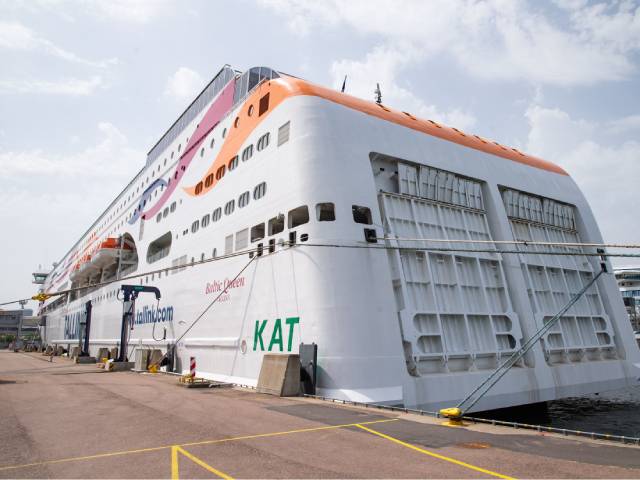 Tallink Grupp’s vessels Silja Europa and Baltic Queen have switched to using shore power at the Port of Tallinn’s Old City Harbour during their port stays. For Tallink Grupp, using shore power in the Port of Tallinn marks an important step towards more sustainable operations which means less air pollution in the city and reduces the noise created by the ships’ engines.

It is estimated that from now, the total CO2 emissions from one Tallink’s vessel switched to shore power during port stay will be subsequently reduced by 100 tons per each month. At the Port of Tallinn Old City Harbour, the shore power capacity can currently accommodate three of Tallink’s ships.

„Today, our vessels can connect to shore power already in three of our home ports around the Baltic Sea who are contributing to creating a cleaner urban environment – Tallinn, Stockholm and Port of Helsinki South Harbour. In Stockholm, our vessels are „plugged in“ already since the summer of 2018. Our fleet’s continuous upgrade programme sets as one of the long-term priorities to equip all our passenger ferries with shore power systems. Now we can connect already three of our vessels for a greener stay in Port of Tallinn simultaneously.“

Last year, the Port of Tallinn installed the innovative shore power systems on five of its piers in the Old City Harbour, total investment amounting to 3.5 million euros, enabling the vessels to reduce emissions and noise pollution emitted from ships’ engines, and cut the ships‘ fuel consumption by using shore power during port stays.

“Tallinn Old City Harbour is one of the busiest ports in Europe, therefore switching to renewable energy and creating shore power capacity for the Port of Tallinn is a significant step in reducing the environmental impact of ship traffic on the environment, towards a cleaner Baltic Sea and urban space. Residents and visitors of Tallinn alike can now enjoy cleaner city air and the noise from the ships’ engines is greatly reduced”.

From now, after mooring in Tallinn Old City Harbour, the onboard diesel generators of the vessels arriving in port will be switched off and the vessels are connected to the shore power supply network. The ships’ energy load is then transferred to the port’s onshore power supply seamlessly, without interfering with any of the services provided onboard. Shore power is available at the Port of Tallinn Old City Harbour for Tallink vessels operating on the Tallinn-Stockholm and Tallinn-Helsinki routes.

The shore power solution was built by AS Elero. Scaleup (Shore-Link) engineers developed solutions for shore-based systems and the remote-controlled crane required for power connection, were also responsible for creating the integral solution. The equipment and automation of the substation was ensured by ABB Power Grids Estonia AS. ABB engineers also helped to develop ship navigation system to make Tallink’s ships shore power capable.

The shore power project of the Port of Tallinn was co-financed by the European Union through TWIN-PORT III measure.