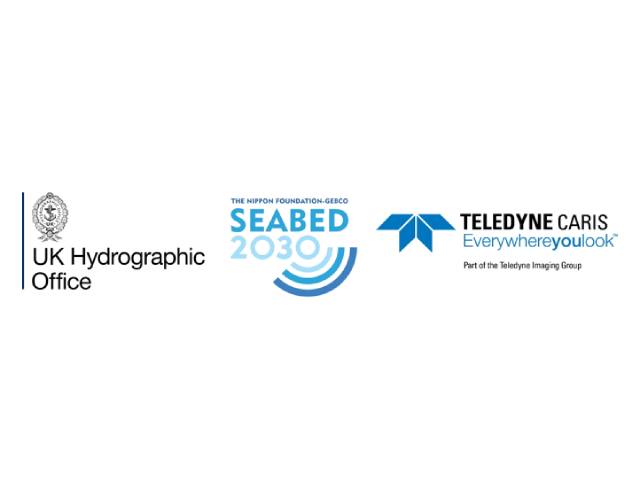 The Nippon Foundation-GEBCO Seabed 2030 Project has entered a technical cooperation agreement with the UK Hydrographic Office (UKHO), a world-leading centre for hydrography specialising in marine geospatial data, and Teledyne CARIS, the leading developer of marine mapping software. The Memorandum of Understanding – announced on the first World Hydrography Day to fall within the UN Decade of Ocean Science for Sustainable Development – will see the parties work together to advance the effort associated with producing the definitive map of the seafloor by the year 2030.

The announcement also coincides with the release of the latest GEBCO Grid figure – with 20.6 per cent of the world’s entire seabed now mapped. When Seabed 2030 was launched in 2017, only six per cent of the oceans had been mapped to modern standards. The latest figure has seen a growth of 1.6 per cent from last year’s data – an increase equating to around half the size of USA.

Seabed 2030 is a collaborative project between The Nippon Foundation and GEBCO to inspire the complete mapping of the world’s ocean by 2030, and to compile all bathymetric data into the freely available GEBCO Ocean Map. GEBCO is a joint project of the International Hydrographic Organization (IHO) and the Intergovernmental Oceanographic Commission (IOC), and is the only organisation with a mandate to map the entire ocean floor.

The UK Hydrographic Office (UKHO) is a world-leading centre for hydrography, specialising in marine geospatial data, from seabed to surface, to help others make best use of the marine environment. This includes partnerships with governments and researchers to support the sustainable growth of the Blue Economy and the protection of our oceans. UKHO also make this data available through their portfolio of ADMIRALTY Maritime Data Solutions – which include a world-leading range of navigational products that can be found on over 90% of ships trading internationally.

For over 40 years, Teledyne CARIS has been the leader in the development of hydrographic and marine geospatial software. Its flagship Hydrographic Production Database (HPD) is used extensively by the UKHO to produce its charts. One of Teledyne CARIS’s newest products – CARIS Onboard360™ – is a near real-time and autonomous data acquisition and processing package.

Commenting on the MOU, Seabed 2030 Project Director Jamie McMichael-Phillips said: “Seabed 2030 is delighted to announce this new partnership with UKHO and Teledyne CARIS on the occasion of World Hydrography Day. As we enter the newly-launched UN Decade, but also final decade of Seabed 2030, we remain humbly aware of what we have yet to achieve – just under 80 per cent of the world’s seabed still to be mapped.

“Last year’s GEBCO Grid saw an increase of four per cent – this was made possible due to significant contributions of existing bathymetric data. Whilst this year’s growth is commendable in light of the global pandemic, it should act as a testament to the value of collaborative working to achieve our end goal, which is ultimately for the benefit of humanity.

“As we enter this final stretch, we call on everybody to get involved and contribute to our efforts. Together, we can make better use of the world’s oceans in a sustainable way. I am confident we will reach our goal as international collaboration grows.”

As part of the new agreement, the three organisations will use a new AI tool developed by Teledyne CARIS and the UKHO as part of their ADMIRALTY Maritime Data Solutions portfolio. The AI-Based Bathymetry Data Noise Cleaning Capability is thought to benefit Seabed 2030 by providing processing efficiency of incoming multibeam bathymetry dataset typical of the type to be received by the Project.

Michel Stanier, Executive Vice-President and General Manager of Teledyne CARIS commented: “We are very pleased to be supporting this project with AI technology. Seabed 2030 represents an opportunity for a unique collaboration whereby new AI methods are being developed and delivered to help solve the data processing bottlenecks created by the huge quantities of data needed to map the world’s oceans over the next decade.”

Peter Sparkes, Chief Executive at the UK Hydrographic Office commented: “We are extremely excited to enter this new partnership with Teledyne CARIS and The Nippon Foundation-GEBCO Seabed 2030 Project.

“Seabed mapping data plays a vital role in supporting maritime trade, the protection of our oceans and the fight against climate change – by keeping mariners safe and supporting sustainable development. Through use of this new capability, we hope to significantly reduce the time it takes to process this foundational data from days to hours – allowing us to build our understanding of the world’s oceans at a greater pace.

“We believe that collaborations like these can help to build a better future for all, so the UKHO will continue to build on this partnership and work with others across the maritime community to support safe, secure and thriving oceans.”

All data collected and shared with the Seabed 2030 Project is included in the GEBCO global grid – the most complete bathymetric dataset of the world’s ocean floor.