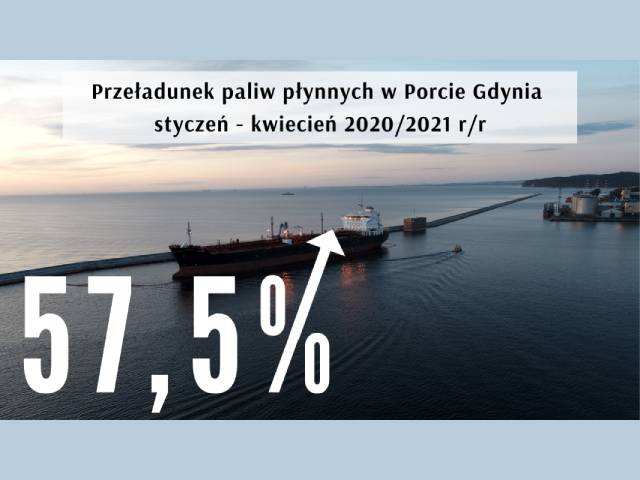 This year promises to be record-breaking – which confirms that the economy is getting better after the year of the pandemic. Already over 1 million tonnes of fuels have been handled this year by the PERN fuel depot at the Port of Gdynia, whereas in recent years such a result was achieved only in the middle of July. The record was broken in the middle of May.

“We are planning to maintain the current pace in the coming months despite a number of repair and investment tasks being carried out at the base,” emphasises Michał Drzazga, manager of PERN base in Dębogórze.

The petroleum products terminal in Debogórze, which uses the Liquid Fuel Handling Terminal on the breakwater of the Port of Gdynia, is currently one of the pillars of the diversified system for supplying Poland with liquid fuels. It is the only cargo handling terminal in Poland that allows large-scale imports of fuel by sea from any region of the world.

“The growing interest in fuel imports by sea has strengthened our cooperation with PERN. Together we aim to strengthen the Port of Gdynia as an independent maritime fuel hub. We strive for complementarity of investments, so that our infrastructure is adapted to the current and future needs of the market,” says Jacek Sadaj, Vice President of the Board of the Port of Gdynia S.A.

Investments in infrastructure make it possible to significantly increase the loading potential of the fuel depot and distribute fuel in volumes consistent with the current and future needs of the domestic fuel market.

PERN is in the process of expanding the Fuel Depot in Dębogórze, which is connected by a direct pipeline to the fuel terminal in the Port of Gdynia. Thanks to the investment the Fuel Depot will be expanded with two new tanks – each with a capacity of 32 thousand tons. Thanks to the expansion, the storage capacity of the depot will increase to almost 260 thousand m³. The planned modernization involves, among other things, extension of the railroad siding, including the construction of two new tracks, each approximately 1 km long, together with turnouts, and the construction of two positions for loading rail tank cars with measurement systems and full automation. The plans for the coming years include further expansion of the Fuel Depot in Debogórze by another 3 tanks. The construction of another tank will commence shortly and it is planned to put into operation next year. The comprehensive development plan for the depot includes not only the expansion of storage capacity but also pipeline transport facilities and modernisation of the railroad frontage.

The Port of Gdynia Authority S.A., in view of the observed increases in liquid fuel handling in the maritime transport market, already in 2017 decided to implement an investment programme aimed at modernising the Liquid Fuels Reloading Station in the Port of Gdynia. The Liquid Fuel Reloading Station, located at the breakwater, was equipped with a new nozzle together with a foundation and associated installations, and put into operation in March 2020. In April this year, a tender was announced for the elevation of the existing R203 Marine Loading Arm at the Port of Gdynia fuel terminal with a steel adapter.

Thanks to the complementary investments carried out by Port of Gdynia Authority and PERN, the Port of Gdynia has become an important location in this market within the Baltic Sea basin, while the Fuel Depot in Debogórze continues to strengthen its position as the largest independent maritime fuel hub in the region.

This is not the end of the story. In mid-May of this year, the Polish Sejm adopted an amendment to the so-called special purpose transmission acts, which provides for extending the list of investments covered by special regulations. In the course of the parliamentary works, the list of investments covered by the special purpose gas pipeline act was extended by 19 investments in the gas distribution network. This includes, among others, the LPG pipeline from the Port of Gdynia to the PERN fuel depot at the back of the Port. The whole governmental project of changes in special purpose acts is to accelerate the administrative procedures. The amendment is to shorten the time needed to obtain all administrative decisions for the infrastructure covered by the regulations to six months.