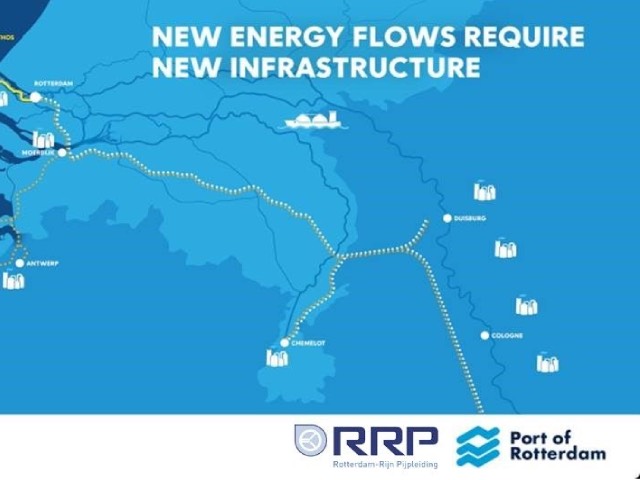 This week, the Port of Rotterdam Authority and Rotterdam Rijn Pijpleiding Maatschappij (RRP) will be starting on a joint feasibility study regarding the development and construction of pipelines for various product streams, e.g. hydrogen (H2) between Rotterdam, the Chemelot (Limburg) industrial estate and North Rhine-Westphalia.

This pipeline bundle could strengthen the port of Rotterdam’s strategic position in Northwest Europe, offers Chemelot (Limburg) further sustainability opportunities and could potentially develop into an important supply route for German industry which has committed to the further reduction of its carbon emissions

The study will be executed by a joint project team formed by the Port of Rotterdam Authority and RRP (shareholder Shell, Ruhr Oel and bp), working in partnership with various Dutch Ministries: the Ministry of Infrastructure and Water Management, Economic Affairs, as well as the Interior and Foreign Affairs. The project team intends to develop a public-private partnership within the chain that will also be open to other parties.

The project team will be building on the results of an initial study into the proposed pipelines performed by the Port Authority, Chemelot (Limburg) and the Dutch state under the header ‘Delta Corridor’. This study also yielded positive indications regarding the possible reinforcement of West-East connections – provided there is a strong enough increase in demand at the German end.

And this now appears to be the case, with Germany’s presentation this year of an ambitious transition plan that involves a total investment value of 9 billion euros. In this plan, a significant share of the associated hydrogen import flows could run via Rotterdam. This hydrogen will be used as both an energy carrier and a feedstock for e.g. petrochemical production and the steel industry.

The Port Authority-RRP team will be focussing on the technical and commercial aspects of the pipelines used to transport hydrogen, CO2, LPG and propane to various industrial clusters and companies in the Netherlands and Germany. In principle, these pipelines will be developed on a ‘common carrier’ basis – allowing a range of different parties to take advantage of the connections. The underground pipelines will not only facilitate the supply of products that contribute to sustainability; they will also reduce the demand for the transport of said products by rail.

Edwin van Espen, Manager Delta Corridor for the Port of Rotterdam Authority, explains the potential importance of this venture: “We can see growing pressure for a timely implementation of the agreed climate goals. The Delta Corridor will prove particularly important to Dutch and German industrial clusters when it comes to implementing their programmes. As such, this project can make a concrete contribution to the development of a sustainable economy, prosperity and employment. In addition, it will have a positive effect on the livability of the areas along the railway tracks, as an underground pipeline corridor will diminish the use of the railway system for the transport of these goods.“

To meet the rising demand for renewable energy – and particularly hydrogen – Rotterdam has entered into a series of partnerships over the past few months with a growing number of countries, including Portugal, Morocco, Oman, Australia, Chile, Brazil and Canada. Rotterdam will be taking advantage of its role as a major import hub to develop and consolidate its position as Northwest Europe’s leading energy port in the longer term. A strong position in this sector will create significant economic benefits for the Netherlands as a whole.

The proposed route of the Delta Corridor runs from Rotterdam via Moerdijk, Tilburg and Venlo to Chemelot (Limburg) and North Rhine-Westphalia. Since the combined construction of a variety of pipelines could yield substantial synergies, the team will not only be mapping out potential suppliers and clients, but also examining to which extent there may be a demand for additional pipelines and power cables that can be added to the proposed bundle. In addition, the study will be looking into opportunities to link other industrial clusters in the Netherlands and Belgium to the corridor.

A substantial length of the proposed corridor actually runs along the existing route of various RRP pipelines. Since the 1960s, these pipelines have been used to transport tens of millions of tonnes of materials and products between Rotterdam and the German state of North Rhine-Westphalia.