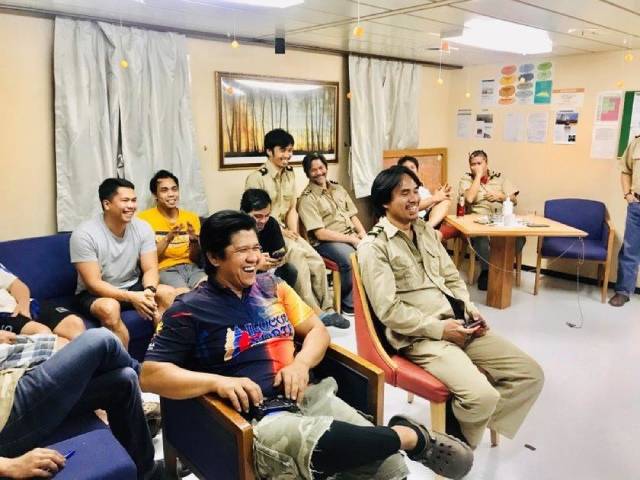 ISWAN’s Social Interaction Matters (SIM) project aims to help shipping and ship management companies encourage seafarers’ social interaction and improve wellbeing on board using programmes with proven success. In this series of articles, we explore the themes emerging from Phase One of the project, in which we conducted research to examine the drivers and barriers to social interaction on board and identify which activities are most successful at engaging crew.

The design of a ship plays an important role in facilitating social interaction on board, from providing sufficient communal space for crew gatherings to creating an environment which is comfortable and encourages relaxation.

Many vessels are built to achieve economies of scale, so although they are often built larger, accommodation quarters and spaces for crew to relax and socialise are not necessarily a priority. One crew members interviewed in our Phase One survey commented:

‘They’ve forgotten about the crew [is] basically what’s come out of the design. All the Gucci stuff for the operational side but actually when you look at living, we haven’t got the space on there’

A balance needs to be achieved between making sure a vessel is fit for purpose and ensuring there is enough space for crew to live and work comfortably. One crew member we interviewed described the psychological impact that the amount of space can have, demonstrating its importance for social interaction:

‘I’ve seen some container ships that have huge spaces for parties, social gatherings … and it gives a kind of a notion of that when you have more space you feel more positive … but when you are in a very compact … enclosed space then you feel very low psychologically’

Some survey respondents shared their observations that ships designed by certain countries such as Norway and Holland allowed more space for recreation and crew gatherings; for example:

‘I’ve been in various companies, so some ships which are more of the Norwegian style build, they have ample space in them. You can place a treadmill at least 6 to 7 people no problem’

These observations indicate that good practice in designing for crew wellbeing does exist, and could be adopted if companies are willing to do so.

As well as space, factors such as lighting, temperature, ambient noise and furnishings can have a powerful impact on people’s mood and behaviour – the hospitality industry, for example, pays great attention to these areas to encourage the public to feel comfortable. In fact, we take great care in making our own homes warm and welcoming, but seafarers live and work in the same place. If their environment does not consider their comfort and activities, both at work and in recreation, then this is likely to affect their desire to socialise and interact with others in their free time. For example:

‘If you choose the kind of lighting that you see in hospitals and public places that are cold and white light, it doesn’t make you want to stay in that area, but if you put up warm lights, it feels more homely and more comfortable’

‘… definitely the furniture … need[s] to be comfortable … I know that some companies work with it, but I think that is something we should focus more on’

One of the vessels taking part in Phase Two of the SIM project reported to ISWAN that crew members were sometimes kept awake by vibrations resulting from changes of pitch and RPM on the vessel. These vibrations were mostly experienced during arrival at and departure from anchorage, at the pilot station and at berth. Such disturbance to the crew may not always be considered as well as it should in ship design, but the resulting fatigue is likely to have an impact on crew wellbeing and, in turn, possibly crew members’ motivation to prioritise socialising over rest.

Our research identified that diversity within the crew – whether age, rank or gender – should also be considered in the design of communal areas on board to ensure crew members can co-exist without conflict. A number of crew members told us that it can be difficult when different individuals or groups want to do different activities in the same space, and suggested that partitions or multiple smaller areas may work better than one large communal space:

‘… the person with the highest rank decides what’s going on more or less …. The younger people, usually lower in ranks, they want to play videogame or PlayStation and they are usually outranked by the older or higher ranks [who] just want to see a movie and don’t want any background noise … instead of one big space maybe you need several smaller ones’

‘… [on] my last ship … our dining room and our living room was actually one huge room and just divided by a sliding door. So, if people were watching television or playing play station and they didn’t want to disturb the one in it, they would close the door, but it would also give the feeling that we were together, even though we were not’

Despite the barriers previously mentioned, we have observed evidence of resourceful use of even the smallest of spaces by crews taking part in our Phase Two trial of social engagement initiatives on board. An example on one vessel was a game of sack toss in the alleyway space behind the crew lounge!

However, considering crew wellbeing in the design of a ship has the potential to make a big difference to levels of social interaction on board. As one interviewee summed up:

‘I think that by ship design and by designing that foundation correctly, we can encourage people to be together’

Phase Two of the SIM project is ongoing – ISWAN is working with a number of shipping companies who are trialling social engagement initiatives on board their vessels. The data and feedback from the trials will be used to develop a toolkit containing guidance for shipping companies. Find out more about ISWAN’s SIM Project and download the Phase One report released in January 2021 here.